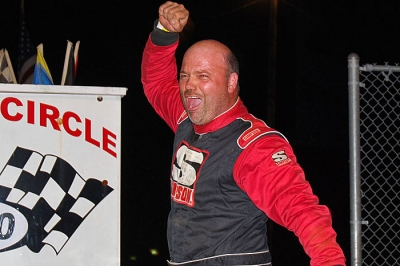 Rickman started from the pole of the 40-lap race with Josh Putnam of Killen, Ala., starting alongside. After the first three attempts to start the race were nullified by cautions, the race finally went green with Putnam taking the early lead over Rickman.

Putnam led the field for the first seven laps until he jumped the cushion and spun in turn, handing the lead to Rickman.

Rickman later appeared to be on his way to victory during a long green-flag run, but Burroughs soon closed the gap. The low-running Burroughs raced by Rickman with six laps remaining and went on to score his first victory on the second-year tour.

“It’s been an incredibly tough time for us this year, and then this past week has been so tough for so many people in this area with the devastation from the tornadoes,” Burroughs said in an emotional victory lane celebration. “This win is dedicated to everyone, who has experienced losses this week.”

Notes: Burroughs’s Barry Wright Race Car is powered by a Brown Engineering Racing Engine with sponsorship from Tucker’s Mobile Home Service, World Ventures, M&M Transport, R2C Filters and Braswell. ... Hollingsworth was the only driver to break the 12-second bracket in time trials. ... Milam received the hard luck award after making hard contact with the front stretch wall in the feature. ... The race returns to North Alabama Saturday night for another $2,000-to-win event. The race was originally scheduled for Mouton (Ala.) Speedway, but was moved to North Alabama after severe weather during the week left Moulton without power.