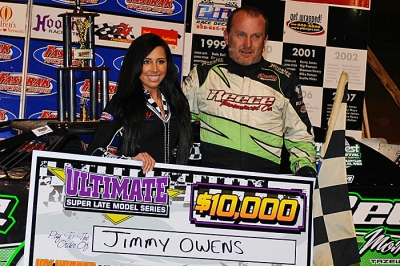 BULLS GAP, Tenn. (April 23) – Jimmy Owens may never want to leave the east Tennessee area again. For the third time in as many weeks Owens of Newport, Tenn., claimed a winner’s check and a trophy at an east Tennessee dirt track Saturday night in Volunteer Speedway’s third annual Late Model Showdown at The Gap. | Slideshow

“We had a good car all night long,” Owens said in victory lane. “We worked on our shocks a little bit before the feature, making some minor adjustments, and we were really good in the race."

The win backs up Owens’s $5,000 unsanctioned victory at Volunteer two weeks ago and another $5,000 he earned for winning a Southern All Stars race at nearby Smokey Mountain Speedway in Maryville, Tenn., last weekend.

“We won a $5,000 to win show here a couple of weeks ago after we drove overnight getting back home from Brownstown, Ind., and now to win this $10,000 event here tonight it’s really awesome," said Owens, a regular on the Lucas Oil Late Model Dirt Series. "I really love the opportunities I get to race here before all these local east Tennessee race fans. You really miss seeing all these people when you’re out on the road racing all over the country every week with the Lucas Oil Late Model Dirt Series.”

The second-starting Owens assumed command on the start Saturday night’s feature over polesitter Chris Ferguson of Mount Holly, N.C. Owens stretched his advantage out to almost a full straightaway over Ferguson and Jonathan Davenport of Blairsville, Ga., and smoothly negotiated slower traffic on the 4/10-mile racetrack.

The fourth-starting Davenport moved by Ferguson on a lap-eight restart and trailed Owens the remaining distance to score the runner-up finish. Ferguson finished third with Eric Wells of Hazard, Ky., and Chris Madden of Gray Court, S.C., rounding out the top five finishers.

Notes: Owens drives a Cornett-powered Bloomquist Race Car with sponsorship from Reece Monument and Gantte Appraisals. ... Scott Bloomquist of Mooresburg, Tenn., was scheduled to start third in the feature, but had mechanical problems just before the start of the race. ... Bloomquist’s second qualifying lap was the fastest time recorded in time trials, but it was disallowed because he went out of place in the order. His first lap counted as his official time. ... The Ultimate Series will return to Volunteer for a $5,000-to-win event May 6 as part of a doubleheader weekend that also includes another $5,000-to-win race at Wythe Raceway in Rural Retreat, Va., May 7.