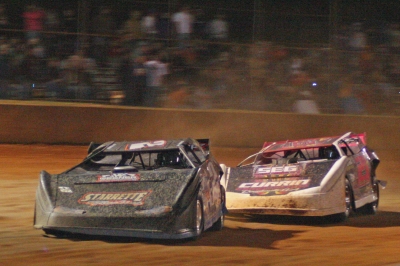 GROVETOWN, Ga. (April 16) — John Henderson Jr. of Aiken, S.C., took the lead just past the halfway point of the Jack Starrette Memorial and held on for an Ultimate Super Late Model Series victory at Gordon Park Speedway. Henderson earned $4,000 for his victory on the first-year circuit. | Slideshow

Chip Brindle of Chatsworth, Ga., finished second in the 25-car field with Ivedent Lloyd Jr. of Ocala, Fla., in third. Benji Cole of Canon, Ga., and Petey Ivey of Union, S.C. rounded out the top five in a race honoring a prolific Augusta, Ga., sponsor and car owner.

Ricky Weeks of Rutherfordton, N.C., led early, but lost the lead to Casey Roberts on a restart. When Roberts had mechanical problems, he handed the lead back to Weeks, who had a flat tire that allowed Henderson to take command.