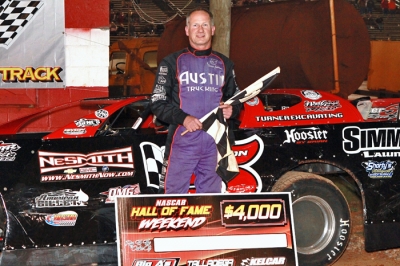 EASTABOGA, Ala. (April 16) — Ronnie Johnson of Chattanooga, Tenn., overtook polesitter Stacy Holmes of Munford, Ala., with an outside pass amid traffic on the 32nd lap and went on to a $4,000 victory on Hall of Fame weekend at Talladega Short Track.

Holmes settled for second at the third-mile oval, which hosted its evening action across the highway from Talladega Superspeedway on one of NASCAR's biggest weekends.

Jason Wilson of Margaret, Ala., was third followed by Terry Smith of Oxford, Ala., and hometown driver Dillon Crim. Reigning track champion Tim Busha of Boaz, Ala., was sixth in the unsanctioned event.

Two cautions slowed the action. Busha and Will Vaught were involved in the first yellow on the first attempted start, while the second yellow appeared for Earl Smith's single-car incident.