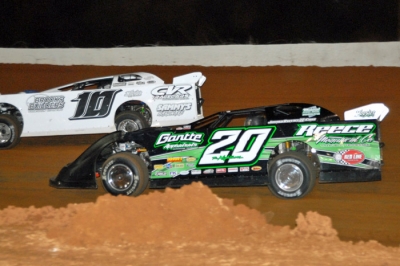 MARYVILLE, Tenn. (April 16) — Polesitter Jimmy Owens of Newport, Tenn., overtook race-long leader Chad Ogle of Sevierville, Tenn., on the 21st lap and led the rest of the way in the Smoky Mountain Spring 50.

Chad Ogle started outside the front row and got the jump on Owens at the outset, using the high groove to edge away from the field until traffic slowed his pace.

Owens closed in on Ogle before a lap-11 caution for seventh-starting Skip Arp of Georgetown, Tenn., who got into the wall. On the restart, Ogle pulled away from Owens again, but the pursuer again tracked him down and took the lead before the halfway point.

As Ogle continued to drop back in the field, Owens stayed in command while Cook and Thomas gave chase. Further back, Billy Ogle Jr. was making progress from his fifth-row starting spot, breaking into the top five on the 36th lap as the race's final caution appeared.

Owens cruised the rest of the way while Billy Ogle Jr. gained two more spots and hounded the runner-up Cook in the final laps.