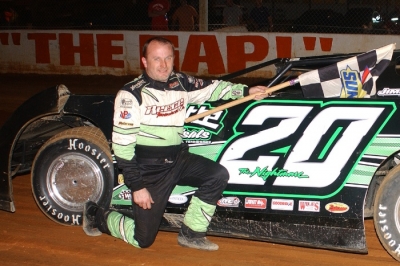 BULLS GAP, Tenn. (April 10) — Jimmy Owens of Newport, Tenn., slipped under Mark Douglas of Knoxville, Tenn., on the 23rd of 50 laps Sunday and earned a $5,000 unsanctioned victory on the familiar high banks of Volunteer Speedway.

”This is a good home-track win for us tonight,” Owens said on a warm east Tennessee night. “Here at the Gap is where I began my racing career. Even though I mainly only get to race here when the Lucas Oil Late Model Dirt Series has an event, it’s really special to get the opportunity to get hang out in the pits with people you’ve known many years and to race before fans who’ve cheered for you a long time.

The fifth-starting Owens wasn't challenged the rest of the way in taking the checkers ahead of polesitter Austin Dillon of Welcome, N.C., at the 4/10-mile oval. Billy Ogle Jr. of Knoxville was third followed by Austin's younger brother Ty and 13th-starting Chip Brindle of Chatsworth, Ga. Douglas, who started outside the front row and led 22 laps, got into the wall on a restart and ended up 20th in the 23-car field.

Austin Dillon and Douglas led the field to green with Douglas powering into the lead as Owens started in the third row. Owens quickly took fourth from Ogle then moved past Chris Ferguson on the fourth lap to take third.

Douglas, a two-time Volunteer champion, pulled to a seven-length lead on Dillon before facing lapped traffic on the 17th circuit, and suddenly the frontrunners were bunched.

Owens picked up the pace, moving to the high side to take second from Dillon and beginning to put pressure on Douglas.

Owens drove in hard on the bottom to get inside of Douglas entering turn one on lap 23 to take a lead he would never relinquish. Two laps later, Ferguson and Jonathan Davenport spun in turn two to bring out a caution.

Back to green with clear racetrack, Ogle distanced himself from the field during a 22-lap stretch that was eventually halted when Bryan Hendrix had a flat tire to bring out the second and final caution. Owens wasn't challenged in the final laps.