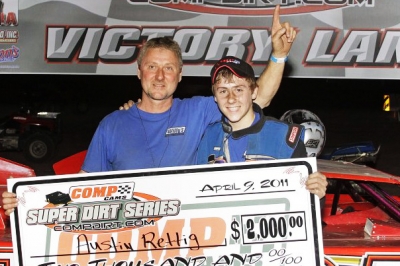 WEST MEMPHIS, Ark. (April 9) – For the second time in as many nights, the Comp Cams Super Dirt Series saw a first-time winner in victory lane as 16-year-old Austin Rettig of Sikeston, Mo., beat Billy Moyer Jr. in a photo finish Saturday night at Riverside International Speedway for a $2,000 payday. | Slideshow

The fourth-starting Rettig moved to second when Greenbrier, Ark., driver Bill Frye, who had ran second the entire race, slowed with a flat tire on lap 31 of the 35-lap race. Rettig began to challenge race-long leader Moyer of Batesville, Ark., following the race’s final restart and pulled alongside with three laps remaining.

Rettig nosed ahead at the completion of lap 33, but Moyer was ahead when the two drivers took the white flag side-by-side. Rettig battled back, overtaking Moyer by just .040 seconds at the finish.

Rettig’s victory came on the seventh anniversary of the death of his older brother Nathan, who was an up-and-coming Late Model driver before he died in an ATV accident in 2004 at the age of 13. Following his victory Saturday night, Rettig dedicated his performance to his brother.

"I just know that Nathan was just there with me the whole way, and this win is for him,” Rettig said in victory lane. “Dad told me yesterday that I was going to win on Saturday night, but to actually do it just means so much. This one is definitely for Nathan."

Notes: Rettig’s Late Model is sponsored by Retco and JFR Graphics. ... Allen Murray of San Antonio, Texas won Friday night’s season opener for the series at Beebe (Ark.) Speedway for his first Late Model victory. Murray finished 20th Saturday night. ... The event marked the first time the series used time trials to determine heat race lineups. ... Frye earned the race’s hard luck award. It was the second-consecutive night he was knocked out of contention by a flat tire. He was running second late in Friday night’s race at Beebe (Ark.) Speedway before suffering a flat left-rear tire. ... The series returns to action with a pair of co-sanctioned events with the MARS Dirt Car Series at Batesville Motor Speedway in Locust Grove, Ark., April 22 and West Plains (Mo.) Motor Speedway April 23.