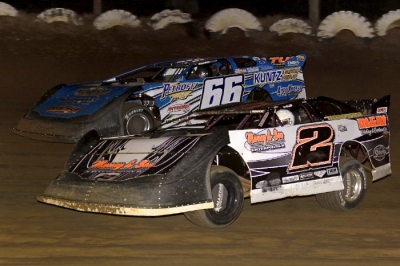 Mitchell of Texarkana, Texas started from the outside of the front row and led polesitter Jack Sullivan of Greenbrier, Ark., for much of the 35-lap race. But Sullivan’s night came to an end on lap 25 when a tight battle with Bill Frye Greenbrier, Ark., resulted in Sullivan spinning.

The third-running Murray was able to move by Frye for second on the ensuing restart to put himself in position to take the lead when Mitchell got into turn one too hard following a lap-33 restart. Austin Rettig also moved by Mitchell to claim the runner-up finish.

Mitchell held on to finish third ahead of Wendell Wallace of Batesville, Ark., in fourth and Gary Christian of Broke Bow, Okla., in fifth. Frye, who ran in the top five for nearly the whole race, fell out of contention late in the event with a flat left-rear tire.