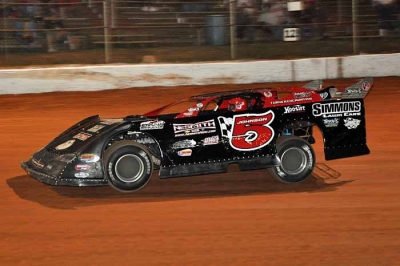 The ninth-starting Johnson worked his way forward early in the race and was running second on a lap-24 restart. The Hall of Fame driver first attempted to move around Brown on the high side, but was unsuccessful. After moving back to the bottom groove, Johnson was able to get the run he needed and took the position.

Johnson held the point through three more restarts to earn the victory while Brown settled for the runner-up finish. Shane Clanton of Fayetteville, Ga., advanced from his 17th starting position to finish third with Skip Arp of Georgetown, Tenn., fourth and Jonathan Davenport of Blairsville, Ga., fifth.

Johnson, whose race car is powered by a CT-525 crate engine, was worried prior to the start of the main event that track conditions wouldn’t favor his lessor-horsepower engine. But he refrained from making any changes to the setup of his race car and track conditions eventually changed to his liking.

"When I first saw the racetrack, I would have bet on anybody except myself tonight," said Johnson, who dedicated his victory to B.J. Parker, the Southern All Stars Series founder who died Monday. "The track was tackier than we expected, and we were gonna make some changes because the track still had traction in it a lot later than we'd figured. After we got a full field of cars on it for the features, I could see it was gonna change color, and once this track starts doing that, it'll change in a hurry. We decided not to change the car, and went back to what we run most of the time. It worked out perfect for us."