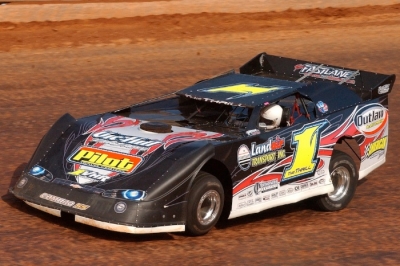 Hill raced to victory at the high-banked quarter-mile oval over Steve Smith of Powell, Tenn., with Michael Chilton of Salvisa, Ky., in third. Billy Ogle Jr. of Knoxville, Tenn., and Ronnie Johnson of Chattanooga, Tenn., rounded out the top five in the track's season-opening event. | Slideshow

"It's just the second time we've run the car, and we've made some changes and tuned on it a little bit this afternoon after the heat race, and we ended up with a really good car in the feature," Hill said. "We kinda knew what we needed to do with it here since we run here quite a bit, and we hit the nail on the head. I've been asked a thousand times how I like this new Warrior car, and I guess now I'd have to say I like it quite a bit."

Hill started from the pole and led every circuit, pacing Chip Brindle of Chatsworth, Ga., during the earlier stages of the event. Hill stretched to a five-length lead over Brindle with Chilton and Smith in pursuit.

But a brace on the right-front corner of Brindle's car broke about 15 laps into the race, tucking his nosepiece under the car and acting like a brake on the straightaways. As the field struggled to get past Brindle in daytime track conditions, Hill pulled to a half-lap advantage over the field.

Smith took second from Brindle, and Chilton dropped him another spot during a wild exchange among the frontrunners as they stacked up behind slowing driver. Eventually Brindle brought out the race's first of three yellows on the 23rd circuit, stopping near the track exit in turn two.

Hill led Smith on the restart, and was able to keep him at bay until the second caution appeared five laps later. Hill repeated his restart success after the third and final caution appeared on the 28th circuit, pulling away from Smith to secure the victory.

Hill was slowed only in the final two circuits as he looked for a way past Christian Rayburn's slower machine. He finally squeezed past, and was able to take the checkered flag by several lengths in front of Smith, who was hampered by a miss in his car's performance.

"It was missing so bad I couldn't do anything," Smith said. "I stayed in the two-barrel, because as soon as I mashed the four-barrel, it wouldn't run. I'm pretty sure it's gotta be something in the electrical system."

Notes: Hill's Warrior has a self-built powerplant is sponsored by Preferred Sandblasting, LandAir Transportation, Pilot and Vic Hill Racing Engines. ... The day's worst accident occurred when Chris Streeval of Edinburgh, Ind., cut down a right-front tire and hit the outside wall at the end of the frontstretch, going airborne and nearly rolling his machine over as it skidded on its left side and then got up on the outside guardrail, riding the wall before coming to rest. He wasn't injured.