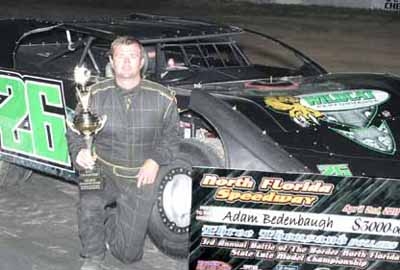 Johnny Collins of Jacksonville, who was in an early tangle with Mark Whitener that saw Whitener get sent to the tail for a restart, finished second after futilely challenging Bedenbaugh on several restarts. Van Sickle survived a lap-34 scrape with Chuck Chitty and a lapped car to hang on to third. Bo Allen of Bryceville, Fla., and Joe Kump of Hollywood, Fla., rounded out the top five. Whitener ended up 21st.

The red flag appeared for the lap-34 accident that sent Chitty's machine up and over the turn-three wall, ending his night.