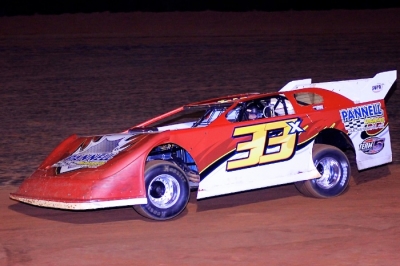 HAUGHTON, La. (March 19) — A teenaged standout for four seasons, it was only a matter of time before Gary Christian of Broken Bow, Okla., broke through with his first Dirt Late Model victory. Christian's benchmark victory came Saturday night at Champion Park Speedway with a full moon glaring down as the 17-year-old earned a $2,500 triumph on the O'Reilly Southern United Professional Racing tour. | Slideshow

Christian, who first began racing Late Models at the tender age of 13, outran winningest SUPR driver Kenny Merchant of West Monroe, La., by three seconds to get the job done at the quarter-mile oval.

While the polesitting Christian led flag-to-flag, it was mayhem behind him with third-starting Merchant and others battling among the top five. Merchant withstood many challenges to claim second despite nursing an ailing motor late in the 40-lapper while hometown favorite Ray Moore finished third. Second-row starter Allen Tippen of Minden, La., was fourth and Robbie Starnes of Baytown, Texas, rounded out the top five.

At the outset of the main event, Christian edged ahead of Merchant while Starnes, Moore and Kevin Sitton battled for third behind him. Christian's blistering pace put him amid lapped traffic on the sixth circuit as he built a four-second margin.

A lap-seven caution slowed the action, followed by a multicar pileup in turns three and four on the ninth lap.

When action resumes, Christian resumed his lead while Moore took third from Starnes and pressured the second-running Merchant, whose engine began popping noticeably by lap 12.

With Christian alone out front at the halfway mark, Merchant doesn't give up, regaining the second spot from Moore on the 22nd lap while Tippen moved into the top-five battle.

Another yellow erased Christian's straightaway lead, and with nine laps remaining Tippen got third, going past Moore and Starnes. A final caution set up a dash to the finish, but Christian held on while Merchant's ailing engine survived the final two laps as he held off Moore.