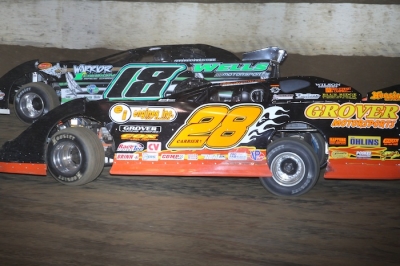 UNION, Ky. (March 19) — Kentucky native Eddie Carrier Jr. finally grabbed a victory at Florence Speedway. And after climbing atop his car to show off his Spring 50 trophy, the 40-year-old Carrier made it abundantly clear he didn't plan on letting his first victory at the half-mile oval remain his only one.

"I'll be back," Carrier yelled in victory lane, perhaps thinking of Florence's lucrative North-South 100 in August. "I'll be back." | Video | Notebook | Slideshow

Carrier led 31 of 50 laps in the unsanctioned event, including the last 23 circuits after inheriting the lead from a penalized Don O'Neal of Martinsville, Ind., who was gunning for his unprecedented fifth Spring 50 victory and second in a row.

Promoter Josh King ruled O'Neal was the cause of two bad restarts on lap 27 — one when he collided with third-running Eric Wells as the field fired off turn four, and another when officials said the leader fired before reaching the restart cone — putting the second-running Carrier out front for the next restart with O'Neal double-filed on the second row.

Carrier first took the lead from polesitter Scott James of Lawrenceburg, Ind., on a lap-10 restart, but the low-running O'Neal went underneath the high-running Carrier on the 19th lap after a side-by-side battle.

When Carrier got the reprieve on lap 27 after O'Neal's penalty, he stuck with the low groove, effectively stealing O'Neal's fastest line and remaining in control the rest of the way. A lap-40 restart gave O'Neal one last shot at Carrier, but he cruised away to a half-straightaway victory while James, rallying from the tail after a lap-15 spin, took second from O'Neal after the final restart.

"I'll be back in this victory lane — some day. Hopefully it's not as long as it was," said Carrier, whose Grover Motorsports team is based in Salt Rock, W.Va. "This is my first win here. I've been close a couple of times, and it seems like we've gotten to running better here, but this is the first time we've been in victory lane here."

A disappointed O'Neal settled for third while Rod Conley of Wheelersburg, Ohio, was fourth despite being part of a backstretch scramble on the 31st lap, one of 11 yellow flags. First-time Florence visitor Chad Simpson of Mount Vernon, Iowa, rounded out the top five finishers.

After Carrier lost his battle with O'Neal before the halfway point, it appeared he wouldn't be able to keep up with the yellow No. 71. But suddenly finding himself back out front after getting instructions from officials to swap spots with O'Neal just past the halfway point, Carrier got up on the wheel and run the low groove.

"The bottom, I mean it was rough, but there was traction down there, and he got by me. Once they put me out front, I thought, 'Man, I better get down there and just stay down there.' They said I got away from (O'Neal) there at the end," Carrier said. "When I got out front, I thought, 'Man, it's going to be hard to hold that guy back there.' Everybody knows he's good here. He's good anywhere. He's a good hard racer. Luckily we just got out front and I guess got away from him, and got my momentum going and stayed out there."

O'Neal wasn't pleased with the rulings that dropped him out of a lead he'd earned eight laps earlier.

"At about every place I go to, the leader can fire clear when he's clearly in turn four," O'Neal said. "I must've missed it at the drivers' meeting about them saying you had to start at the cone, you know, in the feature. I knew in the heat races you have to, but I must have missed it about the feature."

When Carrier dropped down into O'Neal's preferred lower groove, O'Neal couldn't summon the speed he had earlier in the race.

"After that, I had to try something ... and I tried something and lost second," O'Neal said. "I was frustrated, too, and that probably didn't help things. I was probably overdriving the race car."

It appeared James was out of the race following his lap-15 miscue, but he benefitted from the departure of several cars and a fast Riggs Motorsports car to rally back, slipping under O'Neal with fewer than 10 laps remaining.

"I'm just tickled to death for coming back from the tail to finish second the first time out. It's awesome, it's awesome," James said. "Actually, I thought about coming in and getting a harder right-rear tire (following the spin) because I thought I was going to have to drive harder. But I was like, 'Well, if I do that, I probably won't be able to maneuver.' And I was pretty good, obviously — I mean the car was good, not me. The car was really good."

Most of the race stoppages were for single-car incidents, but when Conley got out of shape entering turn three and collected an onrushing Justin Rattliff, front-row starter Kent Robinson lost control trying to avoid a slowing Bobby Pierce and slammed right-rear first into the tire barrier next to an infield opening. Robinson wasn't injured. Nearly half the cautions were within a few laps of the lap-30 mark.

Several drivers who ran up front weren't around at the finish. Wells, who started seventh and ran as high as second, departed with nosepiece damage after his restart scrape with O'Neal. Steve Casebolt of Richmond, Ind., started 12th and was up to third on lap 27, but brake problems forced him out. Frank Heckenast Jr. of Frankfort, Ill., started ninth and broke into the top five near the race's midpoint, but he blew a tire and had a hole in an oil line, forcing him out of the race.

Notes: Carrier's Grover Motorsports-owned Rocket Chassis has a Grover Racing Engine and sponsorship from Engines Inc., Cox Wrecker Service and Blue Ridge Machinery and Tools. ... Eleven of 21 starters were running at the finish, eight on the lead lap. ... The event drew 42 cars last season but 14 fewer this time around. ... Jeep Van Wormer of Pinconning, Mich., had a tough night, losing the pole position in his heat race when officials ruled he twice jumped the just; he then pulled to the infield running third in the heat after breaking an engine. ... Nick Lyons of Centralia, Ill., got into the turn-two wall in the first heat and scratched for the night. ... Because several drivers scratched from the consolation race, officials cancelled the race. ... Scott James made his first 2011 start for Harrisburg, Ill.-based Riggs Motorsports, a team he drove for during Florida Speedway in 2009. ... Corey McKenzie of Paintsville, Ky., piloted the Tim Hall-owned No. 11H Rayburn Race Car driven by Donnie Moran during '09 Florida Speedweeks. ... Isom, Ky., brothers Jarrod and Stephen Breeding were on hand in Bryan Carrier-wrenched cars as they both made their Super Late Model debuts. Stephen got into the backstretch wall in the third heat ... Jerry Rice of Verona, Ky., piloted a new Warrior Race Car for the Valor Motorsports-Brooks team. ... Kenneth Howell of Lovely, Ky., entered in a No. T31 Barry Wright Race Car formerly owned by Georgia-based Tankersley Racing, but ended up switching to the No. 16 driven last season by his father Paul Davis. ... Howell brought out caution flags with spins on lap 15 and lap 27. ... Rusty Schlenk slowed to draw a lap-five caution. ... Jason Jameson slowed on lap 10. ... Jarrod Breeding spun in turn four on lap 27. ... Christian Rayburn brought out the final caution on lap 40 when he stopped while entering the infield on the backstretch.