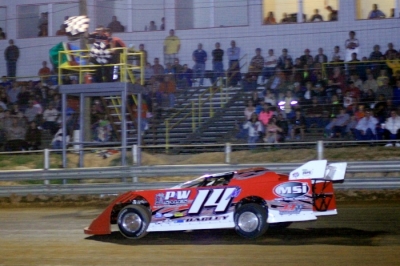 Bagley, a modified ace who stepped up to Late Models in a Wayman McMillan-owned car last summer, outdistanced Timothy Culp of West Monroe, La., by three lengths for a $2,000 victory at the tight quarter-mile oval. | Slideshow

The polesitting Bagley fended off race-long challenges from the 20-year-old Culp and crafty veteran Ronny Adams of Diana, Texas, to secure the 40-lap victory. Culp also claimed his career best Late Model finish as the runner-up while Adams slipped to third in the waning laps. Seventh-starting Allen Tippen of Minden, La., was fourth and hard charger Kenny Merchant of West Monroe, rallied from 10th to finish fifth.

"It really feels good. We've been working hard all winter, and just never give up. Especially to get my car owner back in victory lane," Bagley said. "We got there in lapped traffic and I was just trying to ride and make sure nothing went wrong and (not) make no mistakes. As soon as Ronny showed me that nose, I had to put here in high gear."

Bagley edged away to nearly a two-second lead and broke into lapped traffic after 10 laps, but Adams caught him and they swapped the lead on laps 15-16 with Bagley regaining control as the frontrunners continued through heavy traffic.

After a yellow appeared as Jon Mitchell of Texarkana, Texas, got the worst part of a two-car incident, sending him into the backstretch wall, Bagley and Adams continued dueling up front and the field filtered single-file before a third yellow for Robbie Stuart's turn-two spin on lap 24.

Bagley had a one-second advantage with 10 laps remaining while Culp was all over the rear deck of the second-running Adams. A slight mistake by Adams saw Culp bolt through a hole, making a move into the second spot.

With Bagley and Culp both chasing their first Late Model victories, Culp closed within a few lengths late in the race and was on the leader's rear deck at the white flag. Bagley tightly tucked his Rocket Chassis in the low groove and hit his marks on the final lap to turn back Culp's last-ditch effort.

Notes: Bagley's Rocket Chassis is powered by Wall 2 Wall Performance Engines and sponsored by P&W Sales & Oilfield Mfg., MSI Pumps, Valves & Manifolds, Mr. Frank Motorsports, 360 Motorsports, Club 29, J&J Motorsports, Hyperco and Outerwears. ... Bagley, who left Sterlington with the SUPR points lead, had solid performances early in 2011 at the Wild West Shootout in Tucson, Ariz., along with a pair of top five finishes at the unsanctioned Pelican 100 and SUPR's Texas World Dirt Track Championship. ... The USA Speedway feature took the green at 10:55 pm. Four cautions slowed the action and 14 drivers finished on the lead lap. ... Derek Perkins of Oakdale, La., announced he'll run for SUPR Rookie of the Year honors. Perkins made the jump from the modified ranks and piloted in his No. 22* Late Model in his debut in the premier division. ... Jason Polite of Zachary, La., loaded early because of engine problems. ... Clay Fisher of Dewitt, Ark., suffered radiator, shock and control arm damage in his heat, making the No. 99 machine too extensive to repair for a transfer attempt through the consolation race. ... Other drivers failing to make the feature: Nicholas Brown, Jay Brunson, Jim Bryant, Wesley Chanler, Phil Miller, Derek Perkins and Bryan Sugg.

Correction: Fixes drivers on the lead lap to 14 sted 13.