Davenport drought over with victory at Cherokee 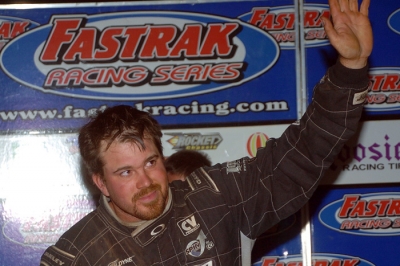 GAFFNEY, S.C. (March 13) — After struggling to meet his usual standards during his first few races of 2011, Jonathan Davenport returned to winning form Sunday when he held off Scott Bloomquist and Casey Roberts to win the ninth annual March Madness event at Cherokee Speedway. Davenport earned $10,000 in the second race of the season on the first-year Ultimate Super Late Model Series. | Notebook | Slideshow | Video

The victory was Davenport’s first since debuting a new race car that he and his Barry Wright Race Cars house car team built during the offseason. The team had struggled to find the handle on the car until referring back to some old notes before Sunday’s race.

“We started the year a little off down in Florida,” said Davenport, who was winless in 11 Super Late Model races coming into the event. “We’ve been trying some different stuff on this new car. Tonight we just kind of went back to the basics and it paid off.”

Davenport of Blairsville, Ga., was scheduled to start fourth in the 60-lap race, but moved up to the front row when outside front-row starter Ross Bailes of Blacksburg, S.C., suffered mechanical problems before the start of the feature.

Davenport took advantage of Bailes’s misfortune, pulling to the lead over polesitter Chip Brindle of Chatsworth, Ga., when the race went green. Davenport quickly showed his strength, pulling away from the field as the third-starting Roberts of Toccoa, Ga., worked his way around Brindle for the second position.

After trailing Davenport for the first half of the race, Roberts briefly took the lead on a lap-31 restart, but Davenport reclaimed the position on another restart three laps later. He again pulled away from the field and held off a charge from Bloomquist of Mooresburg, Tenn., on a late restart to become the first two-time winner of the early-season event at the 4/10-mile oval.

Davenport thought he had squandered his chance of winning after he lost the lead to Roberts. But when he lined up on the outside for the next restart, he quickly realized that the high line was the preferred groove for the true double-file starts employed by the Ultimate Series.

“I thought I (gave it away) when Casey beat me on the start,” Davenport said. “I didn’t know the outside was a good as it was. Luckily after he beat me he chose the inside and we were able to get back by him.”

The seventh-starting Bloomquist was one of the few drivers that could successfully run the higher groove on the dry, dusty racetrack that was rough in some spots.

Bloomquist was quick getting through the field on the high side, but his run stalled out once he got to second. The Hall of Fame driver said he thought his car may have been ailing after he hit a hole late in the race.

“For starting seventh I think we put on a good show. We raced our heart out,” said Bloomquist, who won the event in 2010 when it was sanctioned by the Lucas Oil Late Model Dirt Series. “I hit the holes going into one pretty hard and felt like I bent something there at the end. We punished everything so much by then. All of a sudden I felt a push in the car that I hadn’t felt before, so I think we must’ve bent something.”

Roberts finished third after he, too, hit a hole late in the race, causing suspension damage to his race car. The four-time Southern All Star East Series champion was happy with the effort as he prepares to chase the Ultimate Series title, but thought he had a car capable of winning before the damage was inflicted.

“We had a real good car,” Roberts said. “We got in that canyon there off of four and it bent my right-front lower control arm. We were good up until that. All in all it was a decent run, but it’s disappointing when you got a car that you feel like you had a real good chance to win the deal. ... But it was a good night for us pointswise, so that’s a better way to look at it I guess.”

Notes: Davenport's Barry Wright Race Car is sponsored by Mega Plumbing, En Compass Solutions, Elite Concrete, Baird Transports, Nicholls Plumbing and JRI Shocks. ... Dale McDowell of Chickamauga, Ga., started fifth and ran as high as third in the race, but he was on the losing end of a scrape with Ferguson. The two drivers got together on lap 38, sending McDowell for a spin. He finished 10th. ... The race was slowed by seven cautions including a three-car pileup on lap 38. ... Fourteen cars were still running at the end of the race, which was postponed a week by rain. ... The start of Sunday's main event was delayed nearly two hours as track crews reworked the surface. ... The next Ultimate Series race is a $4,000-to-win event April 2 at 311 Motor Speedway in Madison, N.C.