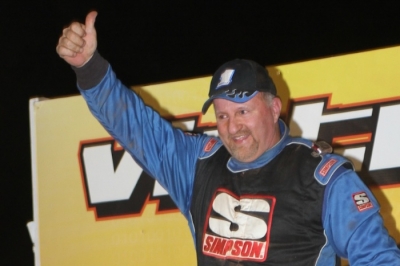 Editor's note: The Carolina Clash announced March 23 that Chris Ferguson was the winner after Ricky Weeks, Ross Bailes and Dustin Mitchell were disqualified after tests were returned for illegally treated tires. The story below doesn't reflect that development.

Weeks got rolling in the high groove following a lap-32 restart, taking second from Chris Ferguson of Mount Holly, N.C., then overtaking race-long leader Ross Bailes of Blacksburg, S.C., exiting turn four and leading the rest of the way for a $4,000 payday.

Ferguson followed Weeks past Bailes on lap 37, but he didn't have time to catch Weeks in the final moments of the 40-lap feature at the 4/10-mile oval.

Ferguson settled for second followed by Bailes, the fastest qualifier of 32 entrants. Mike Gault of Gaffney, S.C., and Luke Roffers of Concord, N.C., who held the second spot much of the race. Kennie Compton Jr. of Bland, Va., challenged Bailes for the lead on a restart, but a spin knocked him out of contention.

Several cautions slowed the main event, including a lap-10 tangle that included six cars and a lap-28 yellow when Jay Sessoms slammed the frontstretch wall and collected Mike Huey and Scott Shirey, knocking all three drivers out of the race.

Notes: Weeks won series championships from 2004-08 and and is the all-time victories leader with 33. ... Furman Parton's race was over after the lap-10 accident. ... Reigning series champ Dennis Franklin brought out three cautions during a 10-lap stretch and was never in contention. ... Petey Ivey slammed the wall to draw a lap-32 caution. ... Michael Brown of Pageland, S.C., earned $2,500 for the weekend's NDRA-sanctioned Crate Late Model feature.