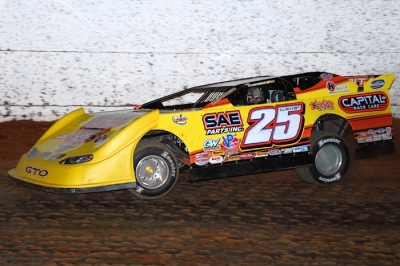 CLEVELAND, Tenn. (March 12) — After debuting his new Capital Race Car with less than stellar performances during Speedweeks in February, Shane Clanton wasn’t sure how long it might take to reach victory lane in the car he designed and built with retired driver Marshall Green. | Notebook | Slideshow

It didn’t take very long at all. Clanton drove the new chassis brand to a convincing victory in his very next outing, earning $10,000 on Saturday night at Cleveland Speedway’s Shamrock 60 for his eighth career Southern All Star Dirt Racing Series victory. Clanton of Fayetteville, Ga., led every lap to give his race team a shot of confidence in the new car.

“Me and Marshall we took on the challenge of building this car and it’s been a lot of work,” Clanton said after his victory. “We’ve had to deal with issues here and there. My hat’s off to my crew for not giving up. It feels good to see all that work payoff some with this win here tonight.”

Clanton started from the pole of the 60-lap race and quickly established himself as the dominant driver. He easily pulled to a comfortable advantage over second-starting David Payne of Murphy, N.C., early in the race until the first caution appeared on lap five when three cars piled up on the back straightaway.

Clanton again pulled to a comfortable lead on the restart while Payne was left to fend off challenges from Todd Morrow of East Ridge, Tenn., and Jimmy Owens of Newport, Tenn.

Morrow pulled alongside Payne on a lap-13 restart, but was unable to complete the pass. Morrow and Owens continued to pressure Payne throughout the middle portions of the race as Clanton pulled to nearly a straightaway advantage on the single-groove racing surface.

Clanton’s only serious threat came midway through the race when he encountered traffic. The slower cars allowed Payne to close the gap, but Clanton soon cleared the heaviest of the traffic and again pulled to a sizable lead.

The traffic never worried Clanton even when he knew Payne was catching him. Knowing that he had a strong race car, the World of Outlaws Late Model Series regular simply bided his time and waited for the opportunity to pass the slower cars.

“My crew chief was showing me signs in turn one,” Clanton said. “I seen where (Payne) got a little close on me so I tried the bottom one time and it slid a little bit. I knew if had to get the lap cars I would have to slide them or just get a good run down the back straightaway and turn under them. The car was just phenomenal. I was just riding behind them and taking my time.”

While Clanton took his time and eventually cleared the slower cars, Payne continued to have his hands full with Morrow and Owens.

Morrow again pulled alongside Payne on a lap-42 restart and appeared as though he may have had enough momentum to complete the pass. But the caution again waved before another lap was completed, and Morrow’s run was negated.

Payne pulled ahead on the race’s final restart and held on to score the runner-up finish.

“I think (Clanton) had a little bit softer tire and got that lead on the start,” Payne said. “I knew that was gonna be a big thing. Whoever got that lead to start with was probably gonna win the race unless somebody had trouble.

“We had a long green run and I was able to pick up some heat in the right front. I thought in lapped traffic we might have a chance cause I could enter a little harder. But second, we’ll take it.”

Notes: Clanton’s car is owned by Ronnie and Janice Dobbins and is sponsored by RSD Enterprises. ... The race’s second caution came on lap 13 and was red-flagged because medical personnel had to tend to a medical emergency in the grandstands; the delay lasted about 10 minutes. ... The race’s final caution on lap 42 was caused when Tanner Works of Cleveland, Tenn., and Bo Shirley of Gadsden, Ala., got together in turn three. Both drivers were running in the top ten before the incident. Works was making his Super Late Model debut in the event. ... The top seven drivers finished exactly as they started the race. ... Eleven cars were running at the end of the race, and all 11 were on the lead lap. ... The race was scheduled to be part of a doubleheader weekend for the Southern All Stars, but Friday night’s $5,000-to-win event at Boyd’s Speedway in Ringgold, Ga., was postponed because of flooding earlier in the week. ... The next series event is scheduled for April 2 at Lavonia (Ga.) Speedway.