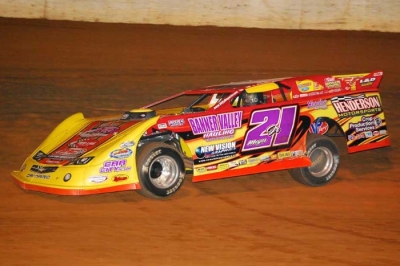 Just nine months ago, Moyer was cruising toward a $2,000 victory at the middle Tennessee oval when a broken motor knocked him out with just a few laps remaining. In this year's season opener at Hohenwald, Moyer led all the way for a 40-lap victory, his second overall of 2011.

“There are a lot of tough regional guys over here and to come in here and get a win is something big for me," the outside front-row starter said in victory lane. "It also erases the heartache of the one that got away here last year.”

Moyer jumped to the lead at the outset with Hickerson, Ray McElhiney, Winkles and Putnam in tow. Moyer built a half-straightaway lead early but a lap-seven caution reset the field.

Moyer eased away again on the restart while Hickerson had his hands full with Alabama youngsters Winkle and Putnam while McElhiney worked the high groove. McElhiney's race ended, however, when he spun on the 11th lap and got into the turn-one wall.

Moyer stayed in control the rest of the way, building a straightaway lead at the finish to take the checkers ahead of Hickerson in the SRRS season opener.