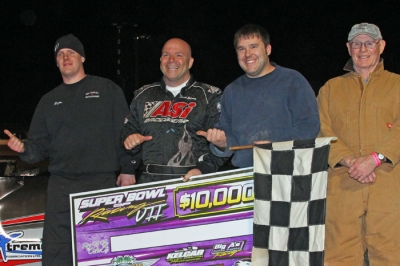 BRUNSWICK, Ga. (March 12) — Talk about a super sweep. Steve Shaver of Vienna, W.Va., completed a sweep of the two-race Super Bowl of Racing VII at Golden Isles Speedway, earning another $10,000 victory Saturday in a weekend of racing postponed from the first weekend in February.

After leading all 50 laps of Friday's feature, this time the third-starting Shaver overtook race-long leader Bub McCool of Vicksburg, Miss., on the 26th lap Saturday and led the rest of the way in the K&L Rumley Enterprises Rocket Chassis.

Shaver, who said in victory lane his car handled even better Saturday than it did Friday, totaled $20,000 during the weekend of unsanctioned racing at the 4/10-mile oval for the North Carolina-based team.

Eighth-starting Steve Francis of Ashland, Ky., rallied to finish second in Saturday's main event. Scott Bloomquist of Mooresburg, Tenn., a winner in Super Bowl action each of the previous four seasons, was shut out this year and settled for third place in the finale. Jonathan Davenport of Blairsville, Ga., started and finished fourth while McCool rounded out the top five finishers.

Fast qualifier Chris Madden of Gray Court, S.C. — who had to start on the tail because he switched to a backup car after right-rear suspension issues leading late in the first heat race — rallied to finish sixth. Polesitter Jared Landers of Batesville, Ark., dropped back a few spots early and ended up finishing seventh.

McCool started outside the front row and took command early over Davenport and Scott Creel while Shaver held the fourth spot. As the frontrunning pack worked through lapped traffic, McCool struggled to get by Mike Nasworthy, and Shaver moved to the outside groove and advanced to the second spot after about 20 laps of the 50-lapper.

With McCool still hampered by traffic, Shaver made the winning move one lap past the halfway point, taking command as he exited turn two and raced down the Golden Isles backstretch.

Shaver got a little breathing room but also faced traffic, allowing Francis to burst into contention and put some head on Shaver. Francis nearly pulled alongside Shaver in turns one and two before Shaver used a slower car as a pick to stretch his lead in the final few laps.

The feature was slowed by five cautions, all for single-car incidents.

Notes: Shaver's Rocket Chassis is sponsored by Styers Curbing and GPS. ... Scott Creel of Franklinton, La., started fifth and flirted with the lead in the early laps, but he slipped over the cushion in turns three and four and fell from contention. ... Fourth-finishing Jonathan Davenport ran a backup car after being involved in a lap-46 accident Friday. ... Casey Roberts, in the same wreck, also went to a backup but struggled, finished 23rd. ... Of the 24 entrants, two were newcomers: Casey Barrow and Brad Neat, while Stephen Castleberry and Mitch Fulford didn't return after Friday's action.