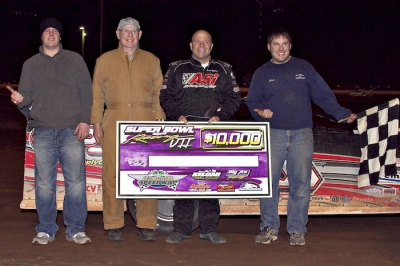 BRUNSWICK, Ga. (March 11) — Steve Shaver of Vienna, W.Va., dominated the majority of Friday night’s Super Bowl of Racing VII round one feature at Golden Isles Speedway, but he thought his chance of claiming the $10,000 victory was slipping away as his right-rear tire began to cause a heavy vibration in his race car during the race’s final 10 laps. | Video | Notebook

Several cautions late in the race weren’t helping Shaver’s confidence either, but the deflating tire held air long enough for Shaver to turn back a late charge from Chris Madden of Gray Court, S.C., and score the victory in a makeup of a Feb. 4 rainout.

“I could feel it. It was kind of flopping a little bit,” Shaver said of his deflating tire. “I thought, 'Oh no, we’re gonna have two or three more (restarts) and the tire’s gonna blow out.' But what do you do? You just try to restart and be as easy as you can. We were lucky enough that we got it done.”

The second-starting Shaver pulled to the lead on the start of the 50-lap race and opened up more than a straightaway lead as the race ran caution-free for the first 39 laps.

Scott Bloomquist of Mooresburg, Tenn., moved from fourth to second on the start, but never mounted a serious challenge for Shaver. Even when encountering traffic, Shaver was able to maneuver around the slower cars relatively smoothly, allowing him to stretch his lead.

The pace was finally slowed when Johnny Pursley of Clover, S.C., stopped on the track after making contact with an infield tire barrier. Shaver pulled back ahead on the restart while Bloomquist again followed.

Bloomquist appeared to stay closer to Shaver following the restart, but after the race went back green following a lap-46 caution, Bloomquist slowed with a flat tire, giving the second position to Madden.

Madden, who was dealing with tire issues of his own, trailed Shaver for the remainder of the race to score the runner-up finish.

“The last 22 laps of the race I had a tire going down. So I was really just trying to manage and hold on,” Madden said. “On the restarts I pushed the issue and passed some cars when I had the opportunity to. We were really good, considering we had a flat tire the last 20 laps.”

Three frontrunners were knocked out late in the race after a three-wide battle resulted in a controversial wreck.

Jonathan Davenport of Blairsville, Ga., and Earl Pearson Jr. of Jacksonville, Fla., were side-by-side following the lap 46-restart, when Clint Smith of Senoia, Ga., attempted to make in three-wide going into turn three.

The move didn’t quite stick, as the three drivers made contact, sending both Pearson and Davenport spinning directly in front of Casey Roberts of Toccoa, Ga. The pileup sent the three drivers to the pits, while Smith continued on to score the third-place finish.

Bub McCool of Vicksburg, Miss., finished fourth after starting 15th. Polesitter Jared Landers of Batesville, Ark., faded all the way to ninth at one point in the race, but battled back to finish fifth.

The victory is the fourth for Shaver since he teamed up with car owners Kevin and Lee Roy Rumley at the beginning of 2010. While the team runs what could be considered a limited schedule compared to most Dirt Late Model teams, they are known for their success at larger, wide-open racetracks like Golden Isles.

“We like (fast racetracks),” said Shaver, whose three previous victories with the Rumley’s all came at the sprawling 5/8-mile West Virginia Motor Speedway. “Leroy has a real good motor package. He builds the motors himself and makes real good horsepower. The way we had the car set up, it turned good. I could really work lapped traffic, and I think that was our advantage.”

“This just makes it all that more rewarding because we’re not gonna race 80 times a year. We’re probably gonna do between 35 and 40. ... This is a good way for us to get our year started.”

Notes: Shaver drove a Rocket Chassis sponsored by GPS and Styers Curbing. ... The Super Bowl of Racing VII will conclude Saturday night with another $10,000-to-win feature. The two-race event was originally scheduled for Feb. 4-5 as a part of Georgia-Florida Speedweeks, but was postponed by rain. ... Fourteen cars were running at the end of the race, with just five cars finishing on the lead lap. ... The race was slowed by four cautions. ... Mike Nasworthy, of Gray, Ga., Mitch Fulford of Montrose, Ga., and Stephen Castleberry of Jacksonville, Fla., all dropped out of the race with mechanical issues. ... The event was Castleberry’s first Super Late Model race.