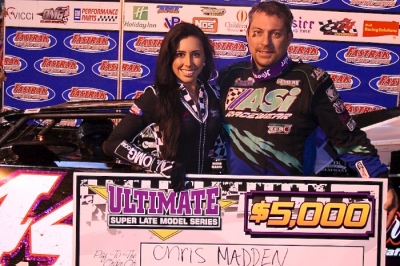 Chris Madden picks up $5,000 at the track on the South Carolina-Georgia border. (stonesracingphotos.com)

MODOC, S.C. (March 5) — A locked-down racing surface at Modoc Speedway didn’t produce much excitement during the first 45 laps of Saturday night’s 50-lap Ultimate Super Late Model Series feature. But that changed when the leaders encountered heavy traffic near the end of the race. | Notebook | Slideshow | Video

The traffic allowed third-running Chris Madden of Gray Court, S.C., to catch and pass both Chris Ferguson of Mount Holly, N.C., and Casey Roberts of Toccoa, Ga., during the final five laps of the race, as he raced to a $5,000 victory in the season opener for the first-year tour that evolved from the Southern All Stars East Series.

Ferguson controlled the majority of the race after starting from the pole, but Roberts and Madden passed him on the outside when he got caught behind a long line of slower cars on lap 47. Roberts briefly appeared to be headed to victory, but he too got stuck behind traffic as he took the white flag, allowing Madden to drive around him on the final lap.

“We just hung around out there and tried to save the tires till the end,” said Madden, who also won the last Super Late Model race at Modoc, an unsanctioned event in 2005. “I knew the lapped traffic was playing in our favor. My car was a little more maneuverable than the other guys and the traffic just opened up the door for me on the last lap.”

Debuting a new Warrior Race Car, Ferguson had the car to beat for most of the race. He jumped out to the early race lead and began to distance himself from the field, while the fourth-starting Roberts and sixth-starting Madden each began moving forward.

Roberts, a four-time Southern All Stars East champion, moved to third on the start of the race and passed Johnny Pursley of Clover, S.C., for second on lap 12.

The race’s first caution came with 17 laps complete, erasing Ferguson’s comfortable lead. Roberts was able to move by Ferguson on the restart, but another caution before a lap was completed gave Ferguson the spot back. Ferguson pulled ahead on two more restarts, and Roberts settled in to second.

Madden’s drive to the front wasn’t as quick as Roberts’s, but it was equally effective. After advancing to fifth early, he moved to fourth on the lap-17 restart and moved by Pursley for third midway through the race.

He set his sights on the two leaders, but didn’t appear to be closing the gap until the traffic came into play on lap 45.

Roberts was the first to try the higher groove, and it worked as he was able to get by Ferguson. But Roberts made an ill-fated decision to move back to the bottom after taking the point, and Madden, who had followed Roberts by Ferguson, stuck to the top and swooped past for the victory.

“The last couple of laps there we got (Ferguson) in one corner and got Casey in the other corner on the outside,” Madden said. “About halfway through the race I had passed a couple cars on the outside. I knew the top was there, but as long as we was single-file it wasn’t gonna be faster. They got slowed up by the traffic and we took advantage.”

It was a much-needed victory for Madden, who drives a Bloomquist Race Car designed and built by Hall of Fame driver Scott Bloomquist. Madden struggled to meet his normal standards in 2010 and he hopes Saturday’s victory signals a turnaround in his performance this year.

“Me and Scott’s been working real hard together to get us back to where we should be,” Madden said. “We’re back shining again like we’re used to. We struggled a little bit last year, but this is a good start in the right direction.”

Ferguson and Roberts went three-wide with a slower car in the final corner, with Ferguson pulling back ahead for the runner-up finish. It was a disappointing finish for Ferguson, who felt he had the fastest car.

“It’s kind of frustrating. “I feel like we had a really good car and should have won the race,” Ferguson said. “I thought I might could get back to the lead after I got back by Casey, but Madden had already shot out ahead. But that’s experience. I shouldn’t have messed up and let them by.”

Roberts was also frustrated after making a strong move to the front, only to end up third.

“Normally whatever the leader does, you do the opposite, so I stuck it up there and it worked,” Roberts said of his move to the lead. “We had a chance to win and came home third. It’s frustrating to come up short, but it’s still a good run I guess.”

Notes: Madden's Cornett-powered Bloomquist Race Car is sponsored by Century Plastics, Cushman Paint & Body, Freeman Plumbing and Hamrick's of Gaffney. ... The race was slowed by three cautions, all three coming at the 17-lap mark. ... Rules for the Ultimate Series allow for different types of engine combinations with weight breaks and aerodynamic enhancements given to lower horsepower powerplants. There was only one such entry at Modoc. Royce Bray of Hull, Ga., finished 13th in a car powered by a spec engine. ... The Ultimate Series was scheduled to race at Cherokee Speedway in Gaffney, S.C., Sunday, but the $10,000-to-win race was postponed one week because of a poor weather forecast. Modoc attracted 24 Super Late Models and 40 Crate Late Models.