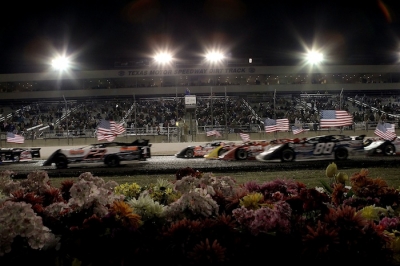 FORT WORTH, Texas (March 5) — With his eye on a victory at the nearby 1.5-mile pavement track in the future, Will Vaught of Crane, Mo., conquered the Texas Motor Speedway Dirt Track on Saturday night, with a superb performance for his first career O'Reilly Auto Parts Southern United Professional Racing victory. | Slideshow

Starting outside the front row, Vaught grabbed the lead from Chris Brown of Spring, Texas, on 10th lap and never looked back in the 40-lap series opener, winning by nearly seven seconds.

Brown battled Vaught early but ended up holding off contenders later in the race to settle for second. Impressive Late Model newcomer Morgan Bagley of Longview, Texas, rallied from 12th to finish third as the hard charger. Ronny Lee Hollingsworth of Northport, Ala., backed up September's third-place run at TMS with a fourth-place finish and former TMS winner Kelly Boen of Henderson, Colo., came from the fourth row to round out the top five.

"You are only as good as with the competition that you race with, so when you race nationally with the likes of (Scott) Bloomquist and (Billy) Moyer and all those guys, it has upped my driving ability I think," said Vaught, who traveled extensively last season with his Paul McKenna-owned team. "This Warrior Race car is brand new, we opened in Volusia with it, went home and made some changes to it. We worked hard on the scales and it paid off down here.

"We really didn't change a whole lot after the heat," added the 24-year-old Vaught, a dirt racer with aspirations on asphalt's ARCA Racing Series. "It was slimy in that heat race and we rolled around that bottom pretty good. Chris (Brown) rolled me on the outside and I thought the bottom was going to be the dominant line and I didn't know where to be. We didn't have any radios or nothing and I couldn't see my guys (crew) over here. I got on the wheel and I was as fast as him around the racetrack, he was running the bottom in three and four, so I started working that top in a little bit.

"We started gaining on him and passed him eventually. I don't know if anyone could run the top in those turns, they said that no one was getting through there as fast as I did."

At the outset, Vaught moved ahead of polesitter Doug Begnaud with Brown, Jeff Chanler and Billy Moyer Jr. in pursuit. Brown took charge on lap two, moving by Vaught and Begnaud. The next lap saw last year's winner Jack Sullivan of Greenbrier, Ark., slow going into turn three to bring out the first caution.

Another quick yellow appeared when Ray Moore clipped Chanler on the fourth circuit, and Moore restarted on the tail.

Brown stayed in control and had a four-car edge on Vaught after eight laps, but Vaught caught the leader and made the pass on the 10th lap just before the frontrunners faced traffic.

Billy Moyer Jr. of Batesville, Ark., took second from Brown and tried to chase down Vaught on the high side just before the race's midpoint while Bagley worked his way into the top five.

Vaught had a comfortable lead with 10 laps remaining while Moyer and Brown battled for second. Brown got the spot before a lap-32 caution for a slowing Gary Christian.

While Vaught sailed the rest of the way, building a huge lead, Moyer dropped out of the top five in the final laps.