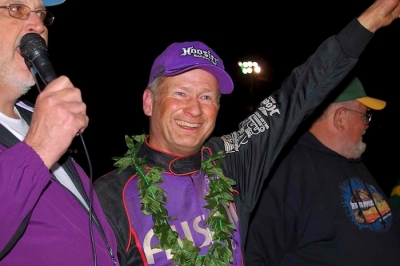 GLENCOE, Ala. (Feb. 27) — Ronnie Johnson has won plenty of major events in his Hall of Fame racing career, but until Sunday he had never won the Super Late Model portion of Green Valley Speedway’s Bama Bash.

After starting 15th in Sunday night’s 14th annual Bama Bash feature, Johnson of Chattanooga, Tenn., took the lead from polesitter Todd Morrow of East Ridge, Tenn., on lap 44 and held off William Thomas of Phenix City, Ala., late in the 75-lapper to claim a $10,000 payday in the Southern Regional Racing Series-sanctioned event. | Blog | Video | Slideshow | Notebook

It was a fulfilling victory for Johnson, who after winning Bama Bash features in both the Crate Late Model and Limited Late Model division in the past, was beginning to wondered if he would ever make it to victory lane in his Super Late Model.

“These $10,000-to-win races aren’t something we go to a lot of any more, and it’s been a while since I won a $10,000-to-win,” said Johnson, who also won the night’s Limited Late Model feature and finished fourth in his Crate Late Model. “It’s a big win for us. We’ve won some of the other divisions in the Bama Bash before, but never won the (Super Late Model feature). I was wondering if it was ever gonna happen. I’m not gonna be doing this forever, so I’m really proud to get it.”

Second-starting Jesse Stovall of Galena, Mo., jumped to the lead on the start of the race and led the first 16 laps. But Stovall’s chance at winning came to a crashing halt when the slower cars of Tony Morris of Murfreesboro, Tenn., and Clint Smith of Senoia, Ga., got together directly in front of the leaders on lap 17.

With nowhere to go, Stovall was among those caught in the resulting six-car pileup that also included two-time defending race winner Ray Cook, who was running third. The crash knocked Stovall and Tony Knowles of Tyrone, Ga., out of the race, while Cook of Brasstown, N.C., continued on to finish ninth.

Morrow assumed the lead for the restart with Thomas second and Chris Wall third. Johnson ran fourth and quickly began to work on Wall of Springfield, La., while Morrow and Thomas battled hard for the lead.

Johnson cleared Wall on lap 28, and by lap 30 he made it a three-car battle for the lead. The three leaders ran neck-and-neck through slower traffic for the next 15 laps as Morrow attempted to hold on to the position.

But Johnson bolted around Thomas exiting turn four on lap 43 and moved by Morrow for the point the very next lap.

While Morrow faded back, Thomas moved to second and applied pressure to Johnson as the two drivers navigated heavy traffic. Thomas nosed ahead of Johnson on lap 50, but Johnson pulled back to the lead on the next lap. Johnson quickly cleared the heavy traffic after regaining the lead, and pulled to nearly a straightaway advantage by the finish.

“We caught some breaks there that helped us,” Johnson said. “They had that pileup and that took three or four cars out and gave us a shot at it. It took a little while to get by Todd there, him and William and myself were racing really hard and we finally found a good line off the bottom there off of (turn) two and got by them and got the lead.”

While Johnson stretched his lead in the closing laps, Wall moved to challenge Thomas for second. He completed the pass on lap 68, but he was unable to close the gap on Johnson.

Wall settled for his second consecutive runner-up finish at the Bama Bash, but thought he may have had a car capable of winning.

“I would have sure loved to have got a late caution there and had a shot at it,” Wall said. “I think I could hold the bottom about as good as anybody and we could run the top pretty good in three and four. ... In hindsight you can always say we should have we made one or two adjustments and been better, but we’re leaving out of here pleased.”

Thomas finished third while Morrow held off a late challenge from seventh-starting Stacy Holmes to finish fourth. Holmes of Munford, Ala., finished fifth.

Notes: Johnson's MasterSbilt Race Car is sponsored by NeSmith GMC, Simmons Lawn Care and VP Racing Fuels and is powered by a GM CT525 crate engine. ... Johnson also earned $2,000 for his Limited Late Model victory. ... The three-day event attracted a total of 192 cars among eight divisions, including 40 Super Late Models, 38 Limited Late Models and 33 Crate Late Models. ... The feature was slowed by just two cautions. The first came on lap three when Joe Armistead Jr. of Senoia, Ga., and Riley Hickman of Ooltewah, Tenn., got together in turn two. The lap-16 pileup caused the race’s second and final caution. The race also went red during the cleanup for that crash. ... The race featured four official lead changes among four drivers. ... Brian Reese of Sharpsburg, Ga., and Jacob Grizzle of Blairsville, Ga., earned provisonals for being the fastest qualifiers not to transfer to the feature.