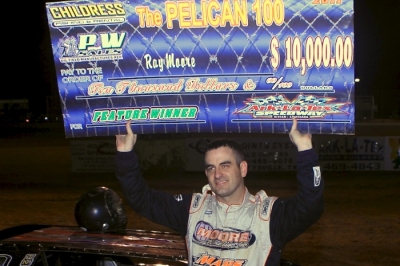 VIVIAN, La. (Feb. 26) — Although it had been 33 months since Late Models raced at ArkLaTex Speedway, the quarter-mile oval showed fans it can produce an instant classic like the 2008 photo finish.

The fourth-starting Moore sparred with McCool and David Breazeale of Four Corners, Miss., over the final laps for the victory, which he celebrated in victory lane with a bow from atop his No. 93 to the standing room only crowd.

Breazeale finished third followed by veteran Kenny Merchant of West Monroe, La., and first-year Late Model driver Morgan Bagley of Longview, Texas. Outside front-row starter Ronny Lee Hollingsworth of Northport, Ala., led most of the race through the middle stages, but was part of a lap-79 caution that knocked him from contention.

Moore doubled his previous richest victory of $5,000 last year at Jones Motor Speedway in Chatham, La., coming alive over the last 25 laps to win the late-race showdown with McCool and Breazeale.

McCool jumped out at the start to lead Breazeale and Moore with slipping back to fourth. McCool set a furious pace as the first 25 laps ran caution-free as the leader entered heavy lapped traffic by the 11th lap.

Kyle Beard's slowing car brought out a lap-25 caution and Hollingsworth, who had already shaved three seconds off McCool's lead, restarted right behind the leader. Hollingsworth took advantage a few laps later, sliding past McCool in turns three and four to take the point before Greg Fore slowed for a lap-29 yellow.

Hollingsworth and McCool edged away from the field on the restart with Moore taking third from Breazeale before a lap-34 caution for debris. Hollingsworth led at halfway over McCool, Moore, Bagley and Breazeale as only 10 drivers remained on the lead lap.

Hollingsworth and McCool stretched their lead to five seconds by lap 59, when Bagley and Moore banged together at the flagstand as Moore dropped to fourth. Moore regained the spot on the 68th lap while McCool closed in on Hollingsworth up front as the race entered the final 25 laps.

Moore made a big move on consecutive laps to spots from McCool and the leading Hollingsworth, but a lap-79 caution returned Hollingsworth to the lead. Hollingsworth fell from contention when he got into turns three and four deep and collected Jon Kirby and Jon Mitchell. Hollingsworth restarted ninth but nosepiece damage hampered him as Moore led the field to green for the final restart.

McCool, however, slipped by Moore just after the restart and Breazeale shuffled Moore back to third on lap 82.

Moore gathered up his car and tracked down Breazeale with eight laps to go, hugging the inside groove to take the second spot while the leading McCool ran hammer-down on the high-side cushion. The low-running Moore battled the high-running McCool as Breazeale closed in for a three-car battle in the waning laps.

Moore edged ahead with McCool and Breazeale hot on his heels, taking the checkers two lengths ahead of McCool in front of the capacity crowd.

Notes: Ray Moore's MB2 Customs chassis is powered by a Jay Dickens Racing Engine and sponsored by Moore Wireline Inc., J&J Motorsports, X-Treme Graphics, tic Tools International and Smith's Towing. ... The win was Moore's first of the 2011 season to go with a pair of top-five finishes last month at the Wild West Shootout in Tucson, Ariz. ... All of the top five except Kenny Merchant opened the season in Tucson. ... The 40-minute feature ended at 10:50 pm and was slowed by five cautions. Fifteen of 22 starters were running at the end of the race. ... Nine cars finished on the lead lap. ... Wendell Wallace of Batesville, Ark., was the biggest mover, going from 12th to sixth. ... Trey Beene of Bossier City, La., took advantage of some good luck and started 21st, by getting his name drawn from the non-qualifiers, to start the feature. ... The last starting spot for the feature was auctioned off to the highest bidder. If there was any signs of what was to come, it started in the bidding war between two-car owner Raymond Childress and Scott Christian, father of driver Gary Christian. Childress outlasted Christian to win the bid for $2,600, to start his driver, B.J. Robinson of Blanchard, La. ... The bidding battle peaking allowed the track to boost starting money in the race to $1,000 up from the originally planned $800. ... A power steering problem had knocked Robinson out of the consolation race. ... Robinson's name was also drawn to receive a free race car wrap. ... Ronny Adams of Diana, Texas, Raymond Taylor of Ball, La. and Wendall Bolden of Greenville, Texas, all scratched from consolation lineups. ... Other drivers failing to make the feature: Neil Baggett, Doug Begnaud, Troy Berdan, Jim Bryant, Jeff Chanler, Wesley Chanler, Gary Christian, Curtis Cook, Kennith Crowe, Heath Culp, Kyle Cummings, Shane Harris, Leon Henderson, Justin Ingalls, Justin McRee, Phil Miller, Bubba Mullins, Alan Murray, Eric Neal, Jody Prince, Bryan Sugg, Stacy Taylor and Allen Tippen ... The next ArkLaTex Late Model race is scheduled for June 25, a $2,000-to-win Comp Cams Super Dirt Series event.