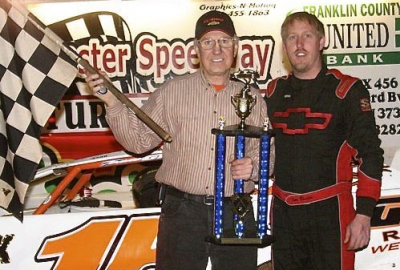 WINCHESTER, Tenn. (Feb. 19) — Tim Busha won his second straight special event at Winchester Speedway. The Boaz, Ala., driver who picked up a $3,000 victory at the third-mile speedway late last season claimed another $3,000 check with his win in the track’s annual WinterFest on Saturday evening. | Blog | Slideshow

Busha started on the outside front row and led every lap. He outran polesitter Lamar Scoggins of Cleveland, Tenn., and a fast-closing Ray Cook of Brasstown, N.C. Traffic was tight in the event that started in the daytime and wrapped up about an hour after dusk. With the lower grove the preferred line, Cook finally moved to the top of the track with about 10 laps remaining. He was able to track down former track champion David Brannon, of nearby Elora, Tenn., and then pass John Owenby in the waning laps for the third spot.

Owenby held on for fourth despite suffering a flat tire on the final circuit, while Brannon was fifth. Brandon King, Ronnie Johnson, Randy Gifford, Mark Haddon and David Gentry rounded out the top 10 in the event that drew 36 entries.

Notes: Busha’s GRT Race Car is sponsored by Kilpatrick Chevrolet and Stealth Racing Carburetors ... It marked the return of WinterFest at the speedway after a one-year hiatus. ... Billy Mayo was the apparent fast qualifier with a lap of 15.06 seconds, but when he pulled out for his heat race, track officials informed him that Brandon King, of Decatur, Ala., was the quick qualifier. “I don’t know how they screwed that up,” said King. “His first lap was 15.38 and I could tell that his second lap was better than his first. Someone came over and stuck their head in my window and said that I was the fast qualifier. I didn’t argue with them. I don’t know what their explanation to him was.” Mayo’s apparent lap of 15.06 seconds didn’t hold up. Mayo ran his heat, loaded up and left. ... Ronnie Johnson was among the few drivers who joined Cook on the high side late in the race and was able to advance a few spots. ... New Winchester Speedway owner Jimmy Nowlin has also leased Duck River Speedway in Wheel, Tenn., for the 2011 season. He has plans to run both tracks, which are about 45 miles apart, with several special events planned. He has, however, said that none of the special events will be sanctioned by any touring series. ... Shannon Davis won the two-barrel Late Model feature, while Tony Gilliam was the winner of the economy Late Model main event.