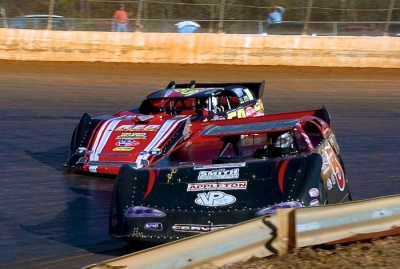 Johnson, 55, added a victory in the Crate Late Model feature for a doubleheader sweep at the third-mile oval that straddles the Tennessee-Georgia border near Johnson's hometown. | Slideshow

In the Super Late Model feature, the polesitting Johnson turned back repeated restart challenges from fellow front-row starter Ray Cook of Brasstown, N.C., in racing to victory while hugging the inside groove.

"We were good on the bottom, but you didn't have to be there. I was afraid the middle would clean up and Ray might get rollin' and have a surprise for us," Johnson said. "I could hear him out there on restarts, so I just tried to run smooth, hit my marks and not give it away.

"The track was slow, but it wasn't a one-lane deal. A lot of people might have thought it was a gonna be rubbered up in the daytime, but it sure wasn't. You could really race here today."

Cook, who tried to use the middle groove to get around Johnson on restarts, twice fell as far as a straightaway behind but held on for a second-place finish. Third-startingRiley Hickman of Ooltewah, Tenn., Lamar Scoggins of Cleveland, Tenn., and Rick Hixson of Soddy Daisy, Tenn., rounded out the top five finishers in front of a solid crowd for the winter event.

Six cautions slowed the action, all in the first half of the race,including a pair of aborted starts at the outset. David Gentry was among those drivers whose cars suffered damaged in the early scrapes.

Notes: Johnson's MasterSbilt Race Car is sponsored by NeSmith GMC, Simmons Lawn Care and VP Racing Fuels. ... MasterSbilt's filled four of the top five spots. ... Runner-up Ray Cook used a steel-head motor, allowing him to use a 12-inch spoiler, a rare engine-body package. He was driving a new car, one that was used for display at the International Motorsports Industry Show in Indianapolis during the off-season. ... Johnson won the Crate Late Model feature over Jeff Smith, Jerry Coffman, Curtis Cline and Jason Welshan. The sixth-starting Johnson took the lead from Cline on a lap-five restart. ... Boyd's gets the regular season rolling on March 4. The next Super Late Model special is a $5,000-to-win race on March 11 for the Southern All Star Racing Series.