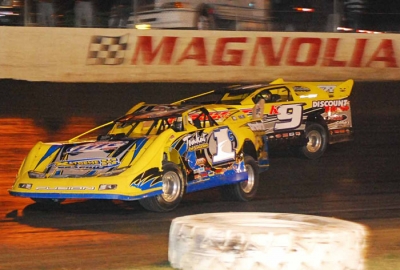 COLUMBUS, Miss. (Nov. 28) — After just a few Super Late Model starts most of the season, Rodney Wing of Meridian, Miss., ended the season with a bang.

Wing led every lap of Sunday's PRO Dirt Car Series season finale at Magnolia Motor Speedway for a weekend sweep of the Possum Grand Prix and his third victory in four starts in November. Wing earned $3,000 in the Thrash Motorsports No. 1c and completed a four-race stretch with three victories and one runner-up finish for winnings of more than $10,000.

David Breazeale of Four Corners, Miss., chased Wing to the checkers for the second straight day in wrapping up the championship on the first-year PRO tour, while Steve Bryan of Collinsville, Miss., was third. Matthew Turner of Dawsonville, Ga., and Riley Hickman of Ooltewah, Tenn., rounded out the top five at the 3/8-mile oval.

Wing moved to the lead from the pole on the start of the 40-lap race with Breazeale and Bryan in hot pursuit. The field battled two and three-wide during the early laps of the feature before the first caution waved on lap seven when Dean Carpenter and Jamie Elam spun on the backstretch.

As the race resumed green flag conditions, Breazeale continued to chase Wing for the lead as Ronnie Johnson of Chattanooga, Tenn., found his way past Neil Baggett of Shannon, Miss., to move into the top five.

The event was slowed again on lap 24 as Baggett slowed on the front stretch, relinquishing his top-10 position. Breazeale turned up the wick on Wing following the restart, but passing became difficult as the track began to take heavy rubber. The top 10 drivers ran nose-to-tail for the remainder of the event as Wing took the win with Breazeale close behind in second.