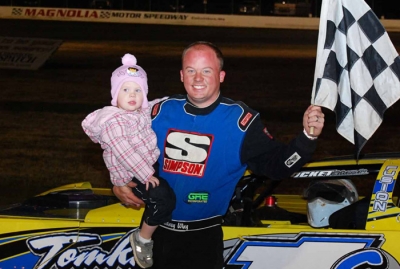 Wing, who has finished no worse than second for Thrash Motorsports over three weekends, will go for a weekend sweep at the 3/8-mile oval Sunday for the conclusion of the track and series seasons.

Brock took command at the outset with Breazeale and Wing in pursuit while front-row starter T.K. King of Columbus quickly faded. Wing took second from Breazeale and made a power move on the high side in turn four to take the lead from Brock after four laps.

Wing entered lapped traffic by the 10th lap, but a lap-15 yellow flag for Scott Flurry, who hit the turn-four wall, bunched the field.

With Wing out front for the restart, Baggett came alive on the restart, moving from fifth to second and began stalking the leader before a lap-19 caution for Dane Dacus, who hit the turn-four wall.

Wing led Baggett, Breazeale, Byars and Jake Knight on the restart and those five held their spots before Tony Morris got into the turn-four wall on lap 25 for the final yellow flag.

Wing stayed ahead of the Baggett-Breazeale battle for second the rest of the way for the victory, while Breazeale took the second spot for good on lap 37.