Davenport gobbles up $5,000 at SAS finale 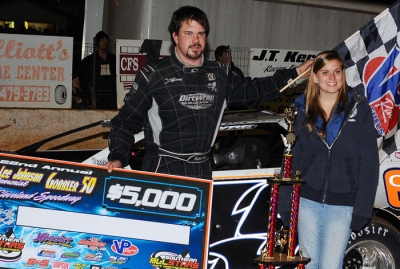 CLEVELAND, Tenn. (Nov. 20) — Early in Jonathan Davenport's impressive 2010 season, he clicked off a victory in the first Southern All Star Series visit to Cleveland Speedway. Davenport ended that tour's season the same way in Saturday's 22nd annual Gobbler at Cleveland, leading every lap for a $5,000 payday. | Slideshow | Video

Clint Smith of Senoia, Ga., came from his eighth starting spot for a second-place finish in the 50-lapper, but no one made a serious challenge of Davenport, who notched his fifth career series victory."

Mark Douglas of Knoxville, Tenn., ran up front the whole way and finished third followed by ninth-starting David Payne of Murphy, N.C., and Skip Arp of Georgetown, Tenn. Polesitter Dennis Erb Jr. of Carpentersville, Ill., ran among the top three most of the race, but a lap-33 flat tire forced him to the pits for new rubber and he ended 13th.

Randy Weaver of Crossville, Tenn., clinched his second straight series championship by taking the green flag, and he ended up 10th in the 22-car field.

Davenport credited a last-minute decision on tire compound to help his No. 49 to victory lane.

"I'll tell you what, it feels good to start the year off with a win here, and to come back and win again," Davenport said in victory lane. "This is awesome."

Smith moved up to second after Erb's departure and was within striking distance of Davenport before the fifth and final caution in the final laps, but Davenport eased away on the final restart with clear racetrack.

"I still think his car was still just a touch better," Smith said. "In lapped traffic, you never know, because if (the leader) makes the wrong decision, the second-place guy usually has an advantage. I'd like to have let it play out, because it was getting a little shaky there."