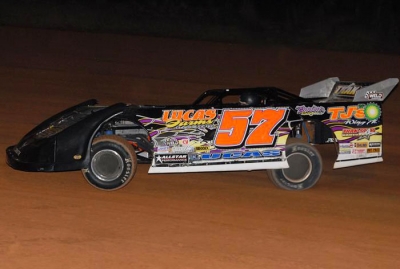 Shep Lucas gets up to speed at Southern Raceway. (Phil Frye)

MILTON, Fla. (Nov. 20) — Shep Lucas knows his way around Southern Raceway. The McKenzie, Ala., driver has recorded a victory in nearly every major event at the 3/8-mile racetrack and he claimed another win there Saturday night when he led every lap of the second annual Topless 50 to earn a $5,000 payday. | Slideshow

The victory didn’t come easy for Lucas, who took the lead on the start of the race from his outside-front-row starting position. He held off an early challenge from pole-starting David Breazeale of Four Corners, Miss., then navigated heavy traffic through a 19-lap green-flag run.

Lucas built a comfortable lead through the middle stages of the race, while fifth-starting Rodney Wing of Whynot, Miss., began moving forward. Wing battled side-by-side with Breazeale after a lap-30 restart and completed the pass two laps later.

Wing closed the gap on Lucas late in the race as the two raced through heavy traffic. A lap-46 caution set up a four-lap dash to the finish, but Lucas pulled away on the restart, forcing Wing to settle for the runner-up finish.

“When those guys come here it kind of makes you step your game up a little bit,” Lucas said of racing against Breazeale and Wing. “My car was pretty good, but I knew Breazeale and Rodney were going to be fast, so I ran (hard) pretty much the whole race.”

Lucas has competed on a limited basis in 2010, but has managed to win three events at Southern Raceway, including a Mississippi State Championship Challenge Series event in May. Lucas considers Southern one of his home racetracks and credits his success there to the many laps he’s made around the speedway’s tricky racing surface.

“I’ve raced here so much. I grew up racing down here and pretty much cut my teeth racing around this place,” Lucas said. “It’s a real different driving track. You can bring all kinds of setups, but driving it is so different than anywhere else you race.”

The race marked the first time Wing competed at Southern Raceway in more than four years. The Whynot Motorsports Park promoter worked most of the weekend to get his Charles Thrash-owned race car adjusted to the racetrack.

“This place here is a way different animal than what we’re used to,” said Wing, who was coming off a Jambalaya 100 victory the previous week in Magnolia, Miss. “It took us all weekend to halfway get a handle on it. But overall, second place ain’t too bad. We’ll take that.

“David’s been on fire this year, so it was good racing with him. And Shep, he owns this place down here most of the time, so we were in good company anyway.”

Notes: Lucas’s Trak-Star Chassis is powered by a Jay Dickens engine and is sponsored by Lucas Farms, TJ’s Country Store, Performance Quick Change and Nine Mile Machine Shop. ... Lucas’s other special event wins at Southern Raceway include the $10,000-to-win Southern 100 and the $4,400-to-win Derek Henley Memorial. Neither of those events are still held at Southern. ... Breazeale earned $100 for winning Friday night’s dash, which was sponsored by Nine Mile Machine Shop. ... Anthony Burroughs of Muscle Shoals, Ala., ran as high as fourth in the feature, before falling out on lap 30. ... The race was slowed by just three cautions.... Twelve cars were running at the finish.