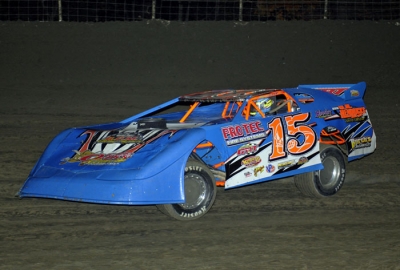 Dacus, who started outside the front row, earned $2,000 for the victory in an event postponed Saturday by rain.

Breazeale, of Four Corners, Miss., started on the pole and appeared to be on his way to victory, but contact with a lapped car on the 21st lap resulted in a hole in Breazeale's radiator, knocking the PRO points leader out of the race. He wasn't the only contender to fall by the wayside.

Third-starting Kyle Beard of Truman, Ark., was up to second after 10 laps when mechanical problems forced him out. Brian Rickman of Columbus, Miss., restarted on the tail after causing an early caution and rallied back to fourth, but he wrecked with a car departing the track on lap 29, heavily damaging his car. He wasn't injured.