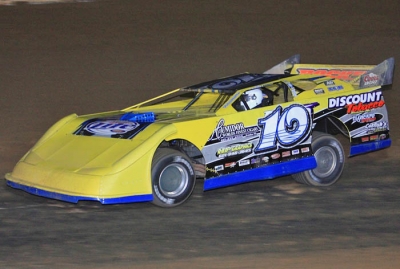 In an event eventually cut to 75 laps that was delayed after a 30-minute rain shower, Wing triumphed in a Chad Thrash backup car that was put together just a couple days before the 14th annual Jambalaya preliminaries began. It was only the third time that Wing, the 2002 SUPR champion and now promoter of Whynot (Miss.) Motorsports Park, had piloted a Super Late Model this season.

Rob Litton of Alexandria, La., was sixth, good enough to secure his second O'Reilly SUPR championship; he also won the series title in 2004.

At the outset, Wing took the early command on Stuart, Culp and Wall as Kyle Cummings got shuffled back. The first caution flew two laps in when Skip O'Neal slowed in turn three.

On the restart, Wing continued leading, but Wall climbed into the third spot, pushing Culp back a position on lap five. Stuart issued an early challenge to Wing three laps later, but he soon felt the pressure from Wall and Culp with the frontrunners negotiating lapped traffic by lap 10.

Wall continued to harass Stuart for the runner-up position as the pair continued the duel for four laps. Wall gained the upper hand, claiming second from Stuart and began trying to track down Wing, who had placed a couple lapped cars between them.

Wing expanded on his lead between laps 16-20, increasing it up to three seconds on Wall. Four laps later, the second yellow of the night waved for the slowed car of Jeff Chanler.

Chris Wall worked past lapped cars on lap 27, putting him in clear sight of the leading Wing. Wall cut Wing's three-second margin in half on lap 33 and was within five lengths three laps later. Stuart maintained a distant third, but Culp and Merchant were trailing closely behind, putting pressure on him at every corner.

The third caution appeared for former race winner David Ashley on lap 39, with the red flag flying soon after for a refueling stop. Wing's car was running hot, so crew members used a screwdriver to puncture holes in the nosepiece to enable the car to allow air flow.

With the race resumed, Stuart lost contact with Wing and Wall behind lapped cars, giving the frontrunners a five-second cushion back to third place. Merchant took fourth from Culp on lap 45. With 25 laps remaining, Wing powered out to a three-second lead over Wall while Merchant worked on the third-running Stuart.

Wall gained ground on lap 56, but Wing kept the cushion of a lapped car between them, and the final caution waved for the slowing Cummings four laps later, virtually assuring Litton the championship.

The last restart would bring Wall's biggest challenge as he tried to dip a nose under Wing, only to have Wing fend off the advances. The top five were spread out on lap 66 as everyone tried to hold their line.

With laps winding down, Wing held his five-length lead over Wall and closed the show strong over the last three laps, never missing his marks in capturing his first SUPR victory since Sept. 14, 2002, at Thunder Valley Speedway in Glenmora, La.

Notes: Wing's Rocket Chassis is sponsored by Discount Tobacco, Humidor Cigars, HP Graphics, El Cheapo Tobacco and Catfish's Towing Service and owned by Charles Thrash. ... Wing notched his 10th career SUPR victory. ... Wing also won the 2000 Jambalaya 100 at Pike County Speedway and joins Kenny Merchant and Ronny Adams as the only drivers to win the event twice. ... The 53-minute feature, slowed by four cautions, ended at midnight with nine cars on the lead lap. ... Rob Litton entered the double-points event needing to finish within 10 positions of Kyle Cummings to win the championship. Cummings started fourth and Litton 14th, but Cummings dropped 11 positions early in the race and Litton's title was never in doubt provided he finish the race. Cummings brought out a caution with 15 laps remaining and finished five laps down. ... Rookie of the Year contenders Josh Danzy and Alex Ashley both had trouble with Danzy breaking in staging before his heat race and Ashley getting caught up in a consolation race accident. Danzy finished 12th in the main event to claim the rookie title while Ashley, who started the feature in Kennith Crowe's No. 31, pulled off the track after just two laps in the feature. ... Morgan Bagley of Longview, Texas, earned a feature starting spot by winning a consolation race in the Wayman McMillan-owned no. 14m. A blown head gasket forced him into Bobby Litton's No. 68 car to start and park for the feature. ... Drivers not making the feature: Joey Credidio, Kennith Crowe, Shannon Lee, Curt Lipsey, Bobby Litton, Patrick Michel, Alan Murray and Chad Thrash. ... The track drew 170 cars among seven divisions. ... Mark Tice of Avon, Miss., won the Crate Late Model feature.