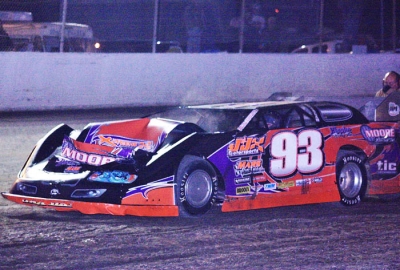 GREENVILLE, Miss. (Nov. 5-6) — Fourth-starting Kenny Merchant of West Monroe, La., raced to a $5,000 victory Saturday, capturing the fourth annual Gumbo Nationals on a chilly night at Greenville Speedway. Merchant held off a late charge by 17th-starting Dane Dacus of Lakeland, Tenn., for the victory in the unsanctioned event. | Slideshow

Last year's winner Ray Moore of Haughton, La., jumped into the early lead from outside the front row, but his race ended amid lapped traffic after eight laps when he ran into the rear of a slowing Stormy Derryberry, damaging his car's radiator and front end.

That left Merchant and polesitter Jack Sullivan of Greenbrier, Ark., to duel for the lead, and Merchant took command and pulled away before Dacus flew toward the front, challenging Merchant in the high groove before falling short in the 40-lap feature.

Dacus settled for second with Sullivan third in his first trip to the Mississippi Delta oval. B.J. Robinson of Blanchard, La., was fourth in a Children Racing entry while 15th-starting Jesse Stovall of Galena, Mo., rounded out the top five in his Greenville debut. Moore was listed 20th in the 21-car rundown.