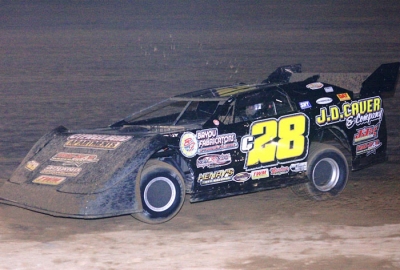 The sixth-starting Moore, who earned $5,000 for an unsanctioned victory at Chatham two weeks earlier, settled for second. Eighth-starting Kyle Cummings of Sibley, La., gained ground in the points chase heading into the final race with his third-place effort. Modified standout Morgan Bagley of Longview, Texas, cemented one of his best Late Model finishes in his young career in fourth while Jeff Chanler of Minden, La., rounded out the top five.

Polesitter Heath Culp of McKinney, Texas, lead the first lap over fellow front-row starter Clay Fisher of DeWitt, Ark., with Allen Tippen, Bagley and Moore trailing. Fisher took the lead while Moore quickly gained a spot on Bagley for fourth on the next lap. The second-running Culp spun in turn two on lap three to bring out the race's first yellow.

On the restart, Moore wasted no time charging into second and quickly pressured Fisher for the point. Fisher lost the lead when he spun, but it didn't cause a caution as Moore took command.

Moore raced to three-car advantage over a charging Cummings by lap six, and the leader began negotiating lapped traffic three laps later. The third-running Chanler got pushed to the infield on lap 13, but didn't lose too much ground.

Cummings slipped under Moore to lead lap 16, but Moore went back ahead four laps later as Merchant began tracking the lead duo after getting around Bagley and Tippen on lap 18. Rob Litton's spin just before halfway bunched the field for the second yellow.

A three-car breakaway ensued with Moore, Cummings and Merchant as Bagley was a distant fourth. Cummings held off Merchant's onslaught for second for 18 laps, but Merchant took the spot on lap 32. Merchant then used the high side to reel in Moore and take his first shot at the race lead, falling half-length short on lap 34.

Merchant nosed into the lead on the next lap, but Moore answered to go back ahead three laps later. The duo raced side by side amid traffic with Merchant coming out on top in front of the frenzied crowd on a chilly, Halloween eve.