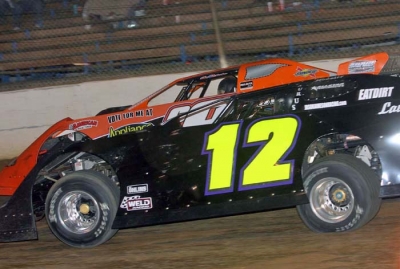 UNION, Ky. (Oct. 23) — The racing season is winding down, but Steve Casebolt probably wishes it would keep on rolling. The 32-year-old racer from Richmond, Ind., grabbed his second victory in as many Saturdays, earning $5,000 at Florence Speedway's season-ending Fall 50. | Slideshow

"The car was excellent from the start of the race on, I sort of lost my way there a little bit a few times and I didn't know how close the (Jameson) was until he passed me," Casebolt said in victory lane. "I thought I need to drive this harder and the car just handled great, that was a heck of a race out there, I was fortunate to get back by him. He's tough here."

Casebolt, who entered Florence's finale a week after a Kokomo Klash victory at Kokomo (Ind.) Speedway, garnered the most passing points after the five heat race among 51 entrants to earn the pole position. Joining Casebolt on the front row was hometown driver Darrell Lanigan, subbing for Audie McWilliams in the John Weber-owned No. 10.

Casebolt grabbed the lead from the outset of the 50-lapper, beating Lanigan into the first turn. Casebolt would lead by a car length the first two circuits until Lanigan pulled event with him a flagstand on lap three. But Casebolt edged away from Lanigan and stretched his lead to six lengths by the 12th lap.

Casebolt put several lapped cars between himself and Lanigan by lap 20, but Lanigan's race was over when he cut down a right-rear tire on lap 21, bringing out the race's only yellow flag.

With Casebolt still out front, James and James were on the move on the restart, with Jameson moving up to second and James up to fourth just before the crossed flags for halfway.

Jameson put some heat on the front-running Casebolt by lap 30 while James took the third spot from Mahoney on lap 36.

Casebolt regained the lead amid traffic on lap 42, and Jameson couldn't find a way past the rest of the way while James slipped back in the final laps.

Notes: Casebolt's MasterSbilt Race Car is powered by a Cornett Racing Engines and sponsored by Dixie Chopper, Integra Racing Shocks, American Racer Tires, Arizona Sport Shirts, Dart Machinery and Sunoco Race Fuels. ... "I want to especially thank Dixie Chopper," Casebolt said in victory lane. "They have been with us a few years now and I really appreciate their sponsorship, hopefully they will be back on board for next season." ... Casebolt plans to run once more this season, racing in the O'Reilly All Star Series finale at K-C Raceway near Chillicothe, Ohio, on Oct. 30. ... Casebolt has previous big-purse victories at Florence in the Spring 50 and Ralph Latham Memorial. ... Casebolt debuted his MasterSbilt at Brownstown (Ind.) Speedway's Jackson 100 last month. ... Fourth-place finisher Cody Mahoney has spent most of the season serving on the pit crew of Lucas Oil Late Model Dirt Series competitor Don O'Neal. ... Late Model rookie Kent Robinson of Bloomington, Ind., was back in action after missing four months because of a shoulder injury he reaggravated in an accident at Eldora Speedway. ... Brad Neat of Dunnville, Ky., made a 21st-to-ninth run to earn hard charger honors; he was piloting his brother Dustin's Longhorn Chassis No. 25. ... Longtime Late Model veteran John "Weasel" Rhoades of Sardinia, Ohio, won the modified feature, his first victory at Florence in 14 years. ... Florence's season is over, but there are plans for more work at the track this fall. The King family plans a major renovation of the main concession stand and restroom facilities in the coming weeks. ... The track announced its major race dates for 2011: the Spring 50 on March 19; the Ralph Latham Memorial on June 4; and the Sunoco Race Fuels North-South 100 on Aug. 12-13.