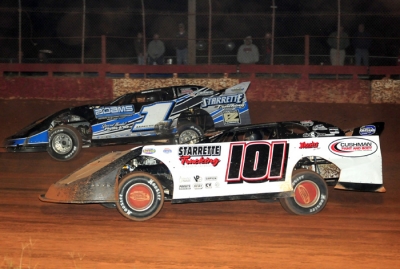 SYLVANIA, Ga. (Oct. 16) — Casey Roberts of Toccoa, Ga., overtook fellow front-row starter Ricky Weeks of Rutherfordton, N.C., on the 20th lap Saturday at Screven Motor Speedway and raced to a $5,000 victory in the finale of the first-year Clash South Tour.

Roberts won his second straight series victory and was perfect in 2010 with two victories in two starts on the series. | Slideshow

Weeks, meanwhile, avoided a scary moment on the 27th lap and finished second to wrap up the $6,000 tour championship. John Henderson of Aiken, S.C., was third followed by Chris Ferguson of Mount Holly, N.C., and Jeff Smith of Dallas, N.C.

The polesitting Weeks led from the outset over Roberts, and they were among the fortunate drivers on the second lap when fifth-running Jeremy Faircloth spun in turn one, triggering a 19-car pileup. After the cleanup, a Mike Measamer spin in turn two collected Jim Rasey and Donald Bradsher on the next lap.

Roberts challenged Weeks on the restart, but Monk Gulledge's turn-four spin brought out a lap-six yellow, and third-running Chesley Dixon retired during the caution period with mechanical problems.

Weeks and Roberts battled door-to-door through the race's early stages with Roberts making the winning pass amid traffic by getting under Weeks in turns three and four.

Weeks hung with the leader and tried to use a lapped car as a pick on lap 27, but Weeks had to bail out when he suddenly came upon the stalled car of Dennis Franklin, who had broken a driveshaft.

After the final caution on lap 31 for separate spins by Faircloth and Gulledge, Roberts stayed ahead of Weeks the final 19 laps to wrap up the victory.

Notes: Roberts drives a Randy Clary Engine-powered Victory Circle Chassis sponsored by Cushman Paint and Body and Starrette Trucking. ... Roberts previously won on the Clash South Tour on July 10 at Lavonia (Ga.) Speedway, giving him a sweep of the two Georgia events on the series. ... Randle Chupp got Safety Kleen Hard Charger honors with his 18th-to-seventh run ... Scott Shirey damaged his left-front A-frame in the first-lap pileup, and it broke on lap 29, ending his night. ... The 32 entries were a season high for the tour.