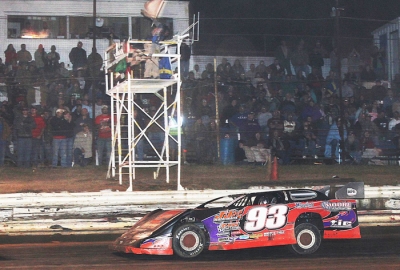 Ray Moore takes the checkers for a $5,000 victory. (ronskinnerphotos.com)

CHATHAM, La. (Oct 16) — Overcoming a potentially engine-damaging miscue, Ray Moore of Haughton, La., turned up the wick late in the the Super Late Model portion of the Deuces Wild at Jones Motor Speedway to grab a $5,000 payday. The fourth-starting Moore chased down race-long leader Jack Sullivan of Greenbrier, Ark., to lead the final 10 laps of the 50-lap unsanctioned event. | Slideshow

"They skipped the out-of-car introduction and sped things up, so we forgot to pull our plastic out in front of the radiator," Moore said of the shield used to help warm up the powerplant. "About halfway through the race, the water temperature is sitting there running at 250 and it is not getting any higher or lower. Finally I was trying to be conservative and I knew we was running in second, I did feel like we were a little bit better than Sullivan, but I was trying to not get the motor too hot.

"With about 10 laps to go, we were still sitting at 250, so I said 'Well, if it ain't let go yet, then I'm going to give her everything she's got.' We ran him down and was going to try him on the outside. It looked like he got a little into some water on the bottom of the track and kind of slid up, we just turned and went under him and went on to the win."

Sullivan, who started outside the front row, settled for second while polesitter Bubba Mullins of West Monroe, La., was third, a half-track behind the winner. Veteran Ronny Adams of Diana, Texas, was fourth and 13th-starting Billy Moyer Jr. of Batesville, Ark., made a late high-side charge to complete the top five.

Two tries were needed to get the feature rolling after contact between Nicholas Brown and Rob Litton sent Brown spinning in turn two. A former track champion at Chatham, the third-starting Brown ended up exiting after another early incident.

Sullivan took advantage on the restart and led the first lap from Mullins, with Timothy Culp, Ray Moore and B.J. Robinson in pursuit. Moore headed for the front, taking second from Mullins on the eighth lap and setting his sights on Sullivan.

B.J. Robinson fell out of the top five with a cut-down tire as a pair of cautions slowed the action, and it was a two-man show up front on the restart with Sullivan and Moore battling while Mullins fell further behind.

A lap-33 caution saw Culp head for the pits for a tire after sustaining a flat, and 11th-starting Kenny Merchant gave up his fifth spot during the caution period because of an overheating engine.

The final 17 laps ran all green with Moore just a few lengths back as the race entered the late stages. Moore looked to the high side of Sullivan on lap 40, but then turned underneath the leader to lead by a nose on lap 41. Moore pulled away over the final laps at the quarter-mile oval in front of a capacity crowd.

Moore didn't realize the plastic-covered radiator until lap 20 when he noticed higher temperatures and his car spitting out a little water during a caution period.

"Earlier in the race, I had ran Sullivan down, got on his bumper and we had a caution and I believe then I realized what we had done. From that point on, I wasn't driving the car like I needed to and was staying married to the bottom.

"I was getting in low and killing my momentum, Sullivan was actually pulling off (from us) a little bit. I knew I wasn't going to get the job done like that, I needed to go ahead and get up to enter a little high then maybe come off low. I don't know what tires he went on, but we chose a hard compound tire. It seemed there in the closing laps, my tires liked running through the black and gained ground running through the middle. I had already gotten to his quarter panel and he missed his mark and that is when I made my move."

Notes: Moore's Mars Race Car is powered by a Jay Dickens Racing Engines and sponsored by Moore Wireline, tic Tools International, J&J Motorsports and X-Treme Graphics. ... Moore also won the Spooky 50 in 2008 at Chatham when the oval was called Fast Trax Speedway. ... Jody Prince of Sibley, La., was scheduled to start outside the front row, but he broke a motor in hot laps. Prince entered the race with three victories in the previous four events held at Jones. ... The checkered flag flew on the 40-minute feature at 12:10 am. ... Thirteen cars finished on the lead lap and the race was slowed by seven cautions. ... Drivers not making the feature included, Mark Andrews, Jody Mayne, Butch Patton and six-time MARS DIRTcar Series champion Terry Phillips. ... The biggest mover finishing in the top 10 was Eric Turner of Springfield, Mo., going from 21st-to-ninth. Turner drove the Terry Pannell-owned No. 33x machine and missed his heat the night before because of a faulty starter wire. Turner started last in his consolation race and made the feature by grabbing the last available transfer spot. ... Last year's track champion Raymond Taylor of Ball, La., started 20th and finished 10th. ... Third place finisher, Bubba Mullins, was in the No. 11JR formerly driven by Waylon Morris Jr. ... B.J. Robinson drove the Raymond Childress-owned No. R5 car, finishing 11th. ... Morgan Bagley of Longview, Texas, drove the Wayman McMillan-owned No. 14M and advanced 10 positions. Bagley was the last lead lap car, finishing 13th. ... John Williams of Haughton, La., edged Dougie Murphrey of Tullos, La., and Kelly Shryock of Fertile, Iowa, by one second in the modified feature. Fifty-nine modifieds showed for the $5,000-to-win special event. ... Four Late Model drivers (Rob Litton, Terry Phillips, Eric Turner, Howard Willis) also participated in the modified portion of the event this weekend. Willis was the only one to make the feature, finishing 10th. ... Late model action returns to Jones Motor Speedway Oct. 30 for the O'Reilly Southern United Professional Racing-sanctioned Spooky 50.