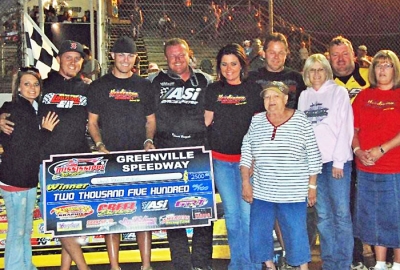 GREENVILLE, Miss. (Oct. 9) — Rallying from the tail, David Breazeale of Four Corners, Miss., wrapped up his second title on the Mississippi State Championship Challenge Series on Saturday at Greenville Speedway with his series-leading fifth victory of the season. Breazeale, who also won an MSCCS championship in 2005, earned $2,500 in capturing the series finale at the quarter-mile oval.

Fore got the jump on Hollingsworth at the outset while the fourth-starting Breazeale quickly grabbed the second spot. When contact between Fore and Breazeale sent Fore's No. 77 slipping over the turn-two banking, Fore was returned to the lead after officials tagged Breazeale with the yellow, sending him to the tail.

Fore was back out front, but he slipped over the banking again — this time by himself — handing the lead to Merchant, who gave way to Kyle Beard of Trumann, Ark. But after Beard led 14 laps, the charging Breazeale went back out front and completed his 50-lap victory to wrap up the MSCCS season.

Notes: Breazeale's MasterSbilt Race Car is owned by Leon Henderson and sponsored by L&D Trucking. ... Breazeale has 20 career MSCCS victories, second only to Chris Wall of Springfield, La., and his 31 victories. ... Only two drivers, Breazeale and Greg Fore, cracked the 14-second mark in time trials at the quarter-mile oval. ... Shannon Lee won the Rookie of the Year honors over Joseph Joiner. ... Greenville Speedway hosts its final weekly action on Oct. 16 then closes the season Nov. 5-6 with the fourth annual Gumbo Nationals, which includes Super Late Models and NeSmith Chevrolet-sanctioned Crate Late Models.