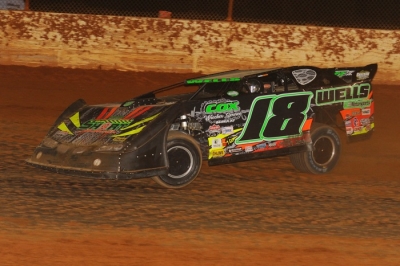 JUNCTION CITY, Ky. (Oct. 2) — Inheriting the lead after a tangle among two frontrunners. Eric Wells of Hazard, Ky., led the final 20 laps at Ponderosa Speedway on Saturday for a victory in the 20th annual Fall Classic. Wells earned $5,000 for his first victory on the National All Star Racing Association. | Slideshow | Marlar wins weekend opener

Victor Lee of Danville, Ky., and Mike Marlar of Winfield, Tenn., dueled up front most of the race, but when Lee made contact with Christian Rayburn's slower car in turn three, Marlar slid into the fray and the race's complexion changed. Lee was sent to the tail for causing the caution and Marlar joined him because he stopped on the track.

That moved Wells into the lead and he controlled the rest of the race, taking the checkers ahead of Dustin Neat of Dunnville, Ky. Greg Johnson of Bedford, Ind., was third followed by Justin Rattliff of Campbellsville, Ky., and David Webb of Nicholasville, Ky. Aaron Ridley of Chatsworth, Ga., was seventh, good enough to clinch his second straight NASRA championship.

Notes: Wells drives a Rocket Chassis with a Custom Race Engine and sponsorship from Cox Wrecker Service, Tim Short Automotive, Expressions Floral and Gifts, Convenient Lube and Rockfork Resources. ... Former Late Model driver Michael England of Glasgow, Ky., won the modified feature in a Rocky Wilson-owned car. ... Ponderosa has one more race scheduled for Oct. 29. The inaugural Trick or Treat 100 pays $3,000 to the winner of the Late Model portion of the event.