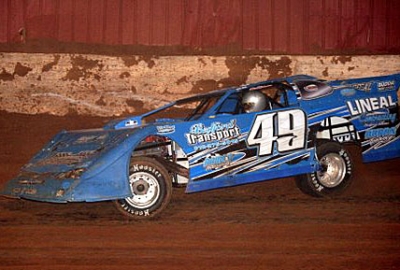 Greg Johnson heads for victory in his Jack Rainey-owned No. 49. (Jimmy Pittman)

BURNSIDE, Ky. (Sept. 18) — Running fourth on the seventh lap, Greg Johnson of Bedford, Ind., was out front a lap later and led the rest of the way for his third career victory in the Lake Cumberland Classic. Johnson earned $3,000 at Lake Cumberland Speedway for a victory co-sanctioned by the National All Star Racing Association and Volunteer Racing Series.

The race's critical moment came when Skylar Marlar of Winfield, Tenn., slid into leader Justin Rattliff of Campbellsville, Ky., in turn four on the seventh lap. The failed slide job sent Rattliff's car briefly atop the wall, and when he came back down, Rattliff found Marlar's car under caution and bumped his several times to show his displeasure.

Rattliff was black-flagged, Marlar was sent to the tail and Michael Chilton of Salvisa, Ky., inherited the lead on the restart. Johnson restarted second and quickly swept around Chilton to take command for the final 33 laps at the 3/8-mile oval.

Three cautions slowed the action, including yellows on laps 27 (for a slowing Kenny Cobble) and 37 (for Tim Patrick's turn-four spin).