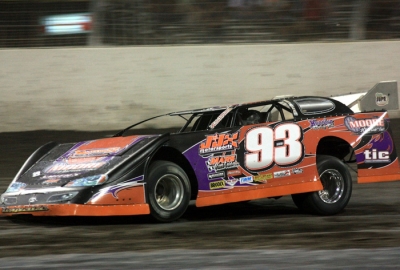 Ray Moore heads to victory in Fort Worth. (Best Photography)

Moore withstood a barrage of heavy traffic late and a battle with Sitton for a one-second victory on the 4/10-mile clay oval just east of the popular asphalt NASCAR superspeedway. Three drivers led the 40-lap event, but Moore and Sitton never got out of reach of one another after wrestling the point away early from Chris Holley of Dayton, Texas. | Postrace notebook | Slideshow

Ronny Lee Hollingsworth of Northport, Ala., finished third, while 10th-starting Kyle Cummings of Sibley, La., and Allen Tippen of Minden, La., rounded out the top five in fifth. Holley faded to 14th.

"The track was tricky. It was a little rough in spots. It was slick, tacky, slick, tacky. The best thing was just having a neutral car and not be too tight or too loose. Let it roll through the corner nice and smooth. We had the best lap times and it showed tonight," Moore said. "We didn't get to practice last night since we just got here this morning. We had to go with what we had, a real neutral set up for the heat race. In March we were here three nights and the track progressively got slicker. So we anticipated that. We were able to get the job done. I was tickled to death."

Sitton took the lead at the outset over Moore, Holley, Alex Ashley and Tippen, but Holley swept into the lead on the fifth lap while Robbie Starnes quickly moved into second.

Starnes and Sitton soon caught Holley for a three-way battle up front four laps later, and Sitton led the pack as Holley was shuffled back to third. Starnes and Holley — Erb Racing teammates — made contact exiting turn two battling for the runner-up spot on the 12th lap, and Moore took advantage to move into the second spot a lap later.

Sitton's 2.5-second advantage disappeared as he entered slower traffic, and Moore got within striking distance at halfway. Moore took command on lap 23 and stretched his margin with Hollingsworth and Cummings moving into the top five.

With Sitton drawing closer at the lap-30 mark, Moore went to the high side of the bumper surface while Sitton worked down low.

Amid heavy traffic in the waning laps, Sitton took advantage to catch Moore, but the frontrunners quickly reacted to avoid a spinning Patrik Daniel between turns one and two for a lap-37 caution. Alex Ashley's car also got into the turn-four wall simultaneously, and a three-lap dash was set after the cleanup.

Moore edged away on the restart and had a six-length edge at the white flag. He hit his marks on the final lap and completed his 14th career O'Reilly SUPR victory.

Notes: Moore's MasterSbilt by Mars Race Car is powered by Jay Dickens Racing Engines and sponsored by Moore Wireline Inc, tic Tools International, Bayou Swabbing LLC, J&J Motorsports and X-Treme Graphics. ... In a dozen SUPR races at Fort Worth, Moore has made every feature race with a previous best finish of third (February 2010 and March 2005). ... Moore won previous SUPR events in September at USA Speedway in Sterlington, La., and Greenville (Miss.) Speedway. ... The checkered flags flew on the 20-minute feature at 11:41 p.m. ... Twelve drivers finished on the lead lap. ... Kevin Sitton has finished second in two of the last three SUPR races at TMS. ... Third-finishing Ronny Lee Hollingsworth piloted the No. 74 of Tony Flynn Motorsports, the third car he's driven in recent weeks. He's also piloted his own No. 18 and won a Sept. 11 MSCCS event at Jackson (Miss.) Motor Speedway in a Henry Cooper-owned No. 14. ... The recent departure of Kyle Cummings from the Raymond Childress team landed him in the No. 33x of Terry Pannell, who also fields cars for Oklahoma driver Gary Christian. Cummings made the most of the opportunity by chopping 40 points off of Rob Litton's SUPR points lead. ... Howard Willis of Dayton, Tex., drove the Gary Rollo-owned No. 17 and rallied from the tail to win a consolation race; he was 13th in the feature. ... David Ashley of Zachary, La., broke a shock connector in his heat before losing a side-by-side battle with Willis in a consolation. Ashley made a 20th-to-10th run in the feature. ... Two Texans, Morgan Bagley of Tyler and Patrik Daniel of Wills Point, pulled double duty running the SUPR and modified features. ... A total of 276 cars in three divisions filled the paved pit area: 36 Late Models, 113 modifieds and 127 limited modifieds. ... Steve Whiteaker Jr. of Corpus Christi, Texas, won the modified feature while Troy Taylor of Fort Worth won the limited modified feature. ... SUPR Late Model drivers failing to make the feature: Marcus Baxter, Wendall Bolden, Shawn Brassfield, Jeff Crane, Bob Ewell, John Ewell, Nate Jantz, Paul Joyner, Phil Miller, Eric Neal, Skip O'Neal, John Sliney, Chris Tarrant and Larry White. ... Next up for SUPR competitors is the Oct. 9 Louisiana State Championship at Baton Rouge (La.) Raceway. (Additional information from J.M Hallas)