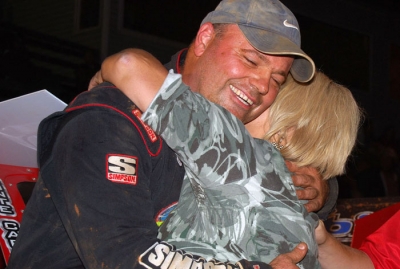 Anthony Burroughs gets a hug from Janet Sandrell. (photobyconnie.com)

Dacus earned $2,000 in Friday's flag-to-flag victory while Burroughs picked up $3,000 on Saturday for duplicating the flag-to-flag performance. | Slideshow

In Friday's 30-lapper, Dacus got the jump on fast qualifier Ben Kittrell of Mount Pleasant, Tenn., and raced to his fourth career SRRS victory. Kittrell finished second followed by Chuck Proctor of Charlotte, Tenn., Burroughs and 10th-starting Josh Putnam of Killen, Ala., who ran as high as third.

In Saturday's main event, Burroughs started outside the front row and led all 40 laps. Jay Brinkley of Raus, Tenn., came from his fifth starting spot to finish second while fast qualifier Eric Hickerson of Linden, Tenn., was third. Dacus and Mark Mears of Decatur, Ala., rounded out the top five in the weekend finale.

The weekend was a tribute to a late Tennessee racer and long-time Thunderhill racer whose sister Janet serves as an SRRS official. Series co-founder Tony Morris drove a car with a specially designed scheme as a tribute to Sandrell's No. 17.

In Friday's action, Kittrell earned a $200 fast qualifying award from the Jason Neely Race for a Cure Parkinson's Disease Foundation.