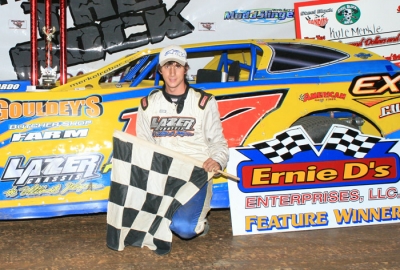 Mark Parks of Forest, Va., led from the outset, but as Merkel made his winning move, Parks slipped up and spun by himself to draw a caution. Merkel led the rest of the way, crossing the finish line ahead of consolation races winners Walker Arthur of Forest, Va., and Joey Leavell of Waynesboro, Va. Bruce Kane was fourth and C.S. Fitzgerald III, who ran was high as second, rounded out the top five.

Gerald Davis of Delray, W.Va., had the second spot after the departure of Parks, but he lost a shock and went over the turn-three banking and out of the event.