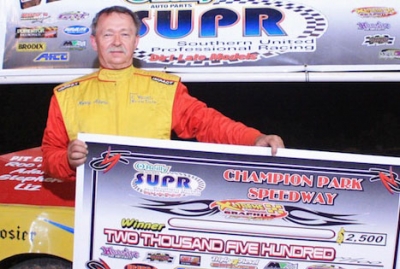 In a race that was split down the middle by a single caution, Adams stable lead near the end of the race was jeopardized by the onslaught of the ninth-starting Cummings, whose mad dash in the closing laps fell short by a nose.

"I tend to get a little cautious towards the end of the race there, when I am leading it, plus getting into lapped traffic too. You don't want to get too radical with the lapped cars. But give Kyle his due, he was really quick," Adams said. "I didn't know it was actually him ... It was probably four or five (laps) to go when I knew there was a car right there on me. Then of course, right there at the flag, I knew who it was."

Cummings was second at Champion Park for the third time this season.

SUPR Rookie of the Year contender Alex Ashley of Zachary, La., was third for best series finish of his young career. Eighth-starting Jon Mitchell of Texarkana, Texas, was fourth and Odie Green of Fouke, Ark., completed the top five.

At the outset, Adams took the lead in front of Ashley and B.J. Robinson while fourth-starting Timothy Culp pulled off the track in the early laps.

Kenny Merchant took third from Robinson while Adams broke away to almost a two-second advantage on the younger Ashley by lap seven. Adams caught the back of the field on the ninth circuit as Merchant pressed Ashley two laps later for second.

Merchant tried everything to get around Ashley and eventually hit an infield tire barrier on the 20th lap, bringing out the race's lone caution and sending Merchant pitside with a broken spindle.

With Adams out front for the restart, Cummings came alive, moving up to fourth on lap 22 and hounding Ashley for second a few laps later.

Adams led comfortably with 10 laps remaining, but Cummings got up to second and cut the margin to just a few lengths in the closing laps. Exiting turn four heading for the checkers, Cummings dipped beneath Adams as they drag-raced to the flagstand. Adams held on by the closest of margins in front of an excited crowd.