Moore dominates for $2,500 at Greenville 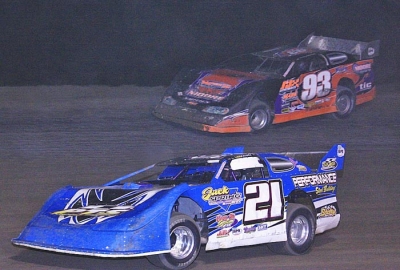 GREENVILLE, Miss. (Sept. 4) — Leading all but five laps, Ray Moore of Haughton, La., obliterated the field at Greenville Speedway on Saturday en route to a $2,500 payday on the O'Reilly Southern United Professional Racing tour. The seventh-starting Moore had his way throughout the 50-lapper and crossed the finish line five seconds ahead of SUPR points leader Rob Litton of Alexandria, La. | Slideshow

Moore thanked Wisconsin chassis dealers Jimmy and Chris Mars for the MasterSbilt Race Car that carried him to victory. "In the last month, we have been on a roll, I tell you, I am real pleased with it," said Moore, who lapped all but eight competitors. "I would have lapped every one of 'em if I could have."

Lee Davis of Greenwood, La., led the first lap before consecutive cautions appeared for the spun cars of Bo Gordon and David Ashley. On the restart, hometown favorite Greg Fore challenged Davis while Moore was quickly up to third.

Moore took second from Fore after a third restart and was pressuring Davis for the top spot on lap five. Moore made his winning move exiting turn four on the next lap and began pulling away from Davis.

Moore hit a spot of traffic that momentarily allowed Davis to keep pace, but by lap 15 Moore had a two-car cushion of lapped cars and started rolling.

Litton took second from Davis on lap 16, but Moore was flying, six seconds ahead of Litton at the halfway point.

Moore stretched that to more than a half-track margin by lap 32 while Merchant fought past Davis and Fore to get the third spot.

A lap-37 yellow erased Moore's huge lead, but with four lapped cars between him and Litton, he was never in danger.

Tippen went from sixth to third on the restart and the final caution appeared on lap 41 when Davis clipped the frontstretch wall, eliminating his car.

With Moore pulled away again, Litton and Merchant battled for second in the race's late stages. Merchant took second with seven laps remaining, but a Merchant slipup in turn two allowed Litton to regain the spot a lap later.

Moore cruised the rest of the way, earning his 13th career SUPR victory.

Notes: Moore's MasterSbilt by Mars Race Car is powered by Jay Dickens Racing Engines and sponsored by Moore Wireline, tic Tools International, J&J Motorsports and Hoosier Tires. ... Moore also won the May 8 SUPR event at Greenville, where he's always strong. ... He hasn't finished worse than third in the the six SUPR events he's entered at Greenville going back to April 2008. ... Litton stretched his points lead over Kyle Cummings, who was 10th. ... The checkered flag flew on the 39-minute feature at 11:27 p.m. ... The main event was slowed by five cautions. ... Nine cars finished on the lead lap. ... Drivers failing to make the feature: Jim Bryant, Greg Dreher, Paul Joyner, Darin Patrick and Brock Williams.