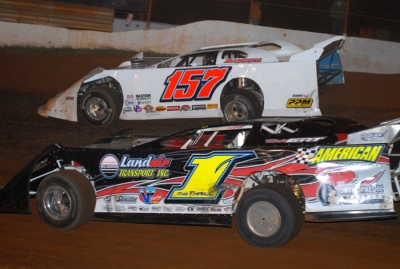 Vic Hill of Mosheim, Tenn., finished second followed by Mike Weeks of Friendsville, Tenn. Anthony White of Clinton, Tenn., and Jason Trammell of Knoxville, Tenn., rounded out the top five in the Labor Day weekend special at the steeply-banked oval.

By virtue of starting on the pole, Marlar missed the big one at Tazewell, a 16-car pileup on the first attempted started when Hill, who started outside the front row, lost control in turn two and created a bottleneck that involved two-thirds of the field. Only Chad Ogle was forced to retire, but several cars received some kind of damage in the incident.

Once everything was sorted out, Marlar and Hill — who suffered little damage in the wreck — battled up front with Marlar staying in command all the way. Hill was able to draw alongside on a few occasions amid traffic, but never quite found the grip to pull off the pass.

Notes: Marlar has driven the Wells Motorsports No. 36 Rocket Chassis in recent weeks, but he was back in his own No. 157, a Rayburn Race Car with an Estes Automotive Racing Engine and sponsorship from Wayne Bowen Racing Supply. ... Sixth-finishing Jeff Wolfenbarger got hard charger honors. ... Rick Rogers, trying to win the race honoring his father, had a flat tire in the first-lap scrum and rallied to finish eighth. ... The night's heat races were spiced by Michael Chilton's antics. Rodney Kiker made an aggressive move on Chilton at the white flag of the fourth heat, knocking him into the frontstretch wall while Kiker went on to victory. When Kiker went to the infield scales Chilton ran over and threw his steering wheel at the parked car, and a fracas broke out that eventually ended with Chilton standing atop the pit wall, waving his arms to the large assembled crowd to gain their approval.