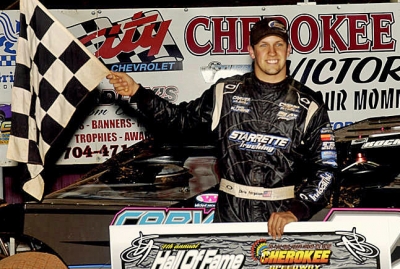 GAFFNEY, S.C. (Sept. 5) — At last year's Hall of Fame race at Cherokee Speedway, Chris Ferguson led 69 laps before his tires gave up in the 75-lap event, dropping him to third at the finish. The 20-year-old driver from Mount Holly, N.C., was determined that wasn't going to happen in this year's 60-lap Southern All Star East-sanctioned event at the 4/10-mile oval. | Slideshow

Choosing a harder tire compound than his competitors to endure the long-distance race, the outside front-row-starting Ferguson survived a late-race scrape when polesitter Casey Roberts blew a tire in the late stages at Cherokee to earn $10,000, the richest victory of his young career.

"I knew if I could just hang with (Roberts and series points leader Johnny Pursley), at the end, I'd be better than both of 'em," Ferguson said, crediting knowledge he's gleaned over the past year since finishing behind Chris Madden and Roberts. "Last year I led all those laps, and I wasn't patient at all, and it cost me in the end. You've gotta be patient in these longer races, especially at Cherokee, where it's kind of abrasive on the tires."

Hometown driver Dennis Franklin finished second followed by Will Vaught of Crane, Mo. Roberts pitted to change his late-race flat and got back up to fourth while 14-year-old Zack Mitchell of Enoree, S.C. rounded out the top five in the caution-plagued race.

Roberts, Johnny Pursley of Clover, S.C., and Ferguson ran in the top three all the way with Ferguson gaining the second spot near the end. But when Roberts got his flat on the frontstretch in the waning laps, Ferguson went high to squeeze between him and the wall while Pursley tried to dive low under the slowing Roberts. The scramble left Ferguson with a bent rim — but with no damage to his tire — while Pursley suffered a bent tie rod and fell from contention.

"It was a pretty wild deal right there down the frontstretch with Casey having the flat right in front of us," said Ferguson, relieved he didn't have a flat himself from the contact.

Ferguson led the rest of the way and credit patience and tire management for helping him to a special victory. "I think it paid off," he said. "That's what really won the race for us."

Ferguson's victory helped him highlight the memory of two late members of the racing community close to him and his family as his car's decal scheme served as a tribute to car owner Jack Starrette, who died just two weeks early, and late Cherokee Speedway photographer Mike Butler, who was among five inductees into the track's Hall of Fame. Ferguson donated his trophy to Butler's family members.

Besides Butler, others inducted before the fourth annual Hall of Fame race were chassis builder Barry Wright and drivers Paul "The Ghost" Gose, Jack Pennington and Ricky Weeks, who finished seventh in the night's race.