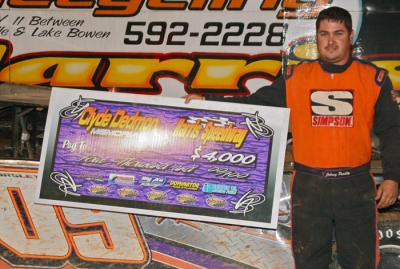 “The car was pretty good, but it wasn’t as good as the other car was," said Pursley, who earned his third series victory of the season. "This car has our Cherokee setup under it, so I am very happy to run as well as I did and hold Casey off. The lapped car deal there, I was just trying to get away from him and luckily for us he spun and brought out the caution."

Pursley and Roberts, of Toccoa, Ga., were in a spirited battle for the lead in the final laps when they came upon the slower car of Colby Cannon. Pursley dove low while Roberts moved high, briefly taking the lead. But contact between Pursley and Cannon sent the lapped driver into the infield for the 10th and final caution of the 40-lapper.

Pursley was restored to the lead for a two-lap shootout to the finish, and he held on for the victory over Roberts. Chris Ferguson of Mount Holly, N.C., was third followed by Furman Parton of Union Mills, S.C., and 12th-starting Mike Gault of Gaffney, S.C.

Notes: Pursley’s Bill Straight-owned Rocket Chassis is powered by a Clements Race Engine and sponsored by Twin Oaks Farms, Fred Caldwell Chevrolet, Phil’s Starter and Alternator, Heintz Performance, Simpson, Butler Built and DirtWrap. ... Chris Ferguson's car sported a tribute decal scheme honoring late car owner Jack Starrette. .... The most serious of the 10 cautions came on the 18th lap when Jordan Bland of Concord, N.C., broke a driveshafter and hit the wall; he was shake up but climbed from the car under his own power. ... The series wraps up the Labor Day weekend on Sunday with the $10,000-to-win Hall of Fame 60 at Cherokee Speedway in Gaffney.