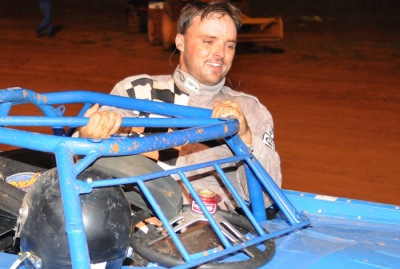 "When I passed Neil, I knew it wouldn't be easy," Broadus said. "I stayed on the bottom and raced as hard as I could and hoped he didn't pass me on the top side."

Baggett was second followed by hometown driver Chad Thrash. Steve Bryan of Collinsville, Miss., was fourth and cut into the points lead of David Breazeale of Four Corners, Miss., who started on the pole but settled for ninth after tangling with a lapped car.

Overall fast qualifier and outside front-row starter Jim McDuffie of Meridian finished 16th after having a flat right-rear tire.