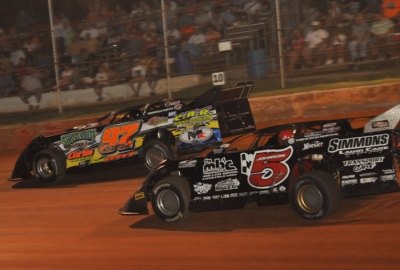 RINGGOLD, Ga. (Aug. 20) — In a race-long battle of long-time Tennessee veterans, Skip Arp of Georgetown, Tenn., came out on top Friday at Boyd's Speedway after Ronnie Johnson of Chattanooga, Tenn., lost a driveshaft while leading with five laps remaining. Arp earned $3,000 for the 40-lap victory on the Southern Regional Racing Series, his second tour victory of the season at the track on the Tennessee-Georgia border. | Slideshow

Brandon Kinzer of Allen, Ky., finished second followed by 12th-starting William Thomas of Phenix City, Ala. David Payne of Murphy, N.C., and Randy Weaver of Crossville, Tenn. — in a Bob Harris-owned No. B1 — rounded out the top five. Polesitter and hometown driver Kevin Gibson was 12th and Johnson ended up 18th.

Arp took the lead at the outset from outside the front row, but the fifth-starting Johnson took command on the 10th lap while Josh Putnam of Florence, Ala., chased the frontrunners in third. Arp regained the lead from Johnson on lap 14, but Johnson worked his way back out front just past the halfway point before Putnam's demise with a blown engine.

Johnson was in control on the restart, but his driveshaft woes knocked him out of contention with five laps remaining, and Arp led the rest of the way.

Notes: Arp drove the Bobby Giffin-owned No. 97 GRT Race Car sponsored by Stanley Best Heating & Cooling and Curtis Equipment Sales. ... Arp's previous SRRS victory came May 7 at Boyd's. ... Tony Morris and Jacob Grizzle entered the event tied in SRRS points, but Morris inched ahead by finishing ninth while Grizzle was 15th. ... Craig Burrows survived a first-lap melee in the Crate Late Model feature for a victory in that division. ... SRRS competitors wrap up the weekend with a Saturday event at Tri-County Racetrack in Brasstown, N.C.